Whatever you think about Dropbox‘s place in the future of communication, the company has been on a roll this year. Following up on a big redesign last week, which cleaned up navigation, search, and photos, chief executive Drew Houston got on stage last night at South By Southwest to talk about its early days, and where it’s going next.

First, the newsy bits. The company was profitable last year, he said yesterday, even though 96% of its 50 million-some users are on the free version. And, he confirmed that it had been valued at the $4 billion valuation that Arrington had heard around when it closed its massive $250 million round last fall. While he didn’t talk revenue, he said that more and more of its free users were moving to larger storage plans and starting to pay.

“Some service like ours is going to tie it all together,” he said on stage, and become a core part of how people share information across the web and mobile devices. While other companies offer their own types of cloud storage services for consumers, no one else has built an easy-to-use, platform-agnostic system. Each of these companies also has their own turf to protect – iOS, etc. — he said during the talk, and has their best engineers focused on other, more core products.

The redesign may just feel like a nice polish, but it’s a key part of the plan going forward. With each little gain in engagement, and in the amount of data stored (like a bunch of big photo files), any of its millions of free users might suddenly decide to start paying 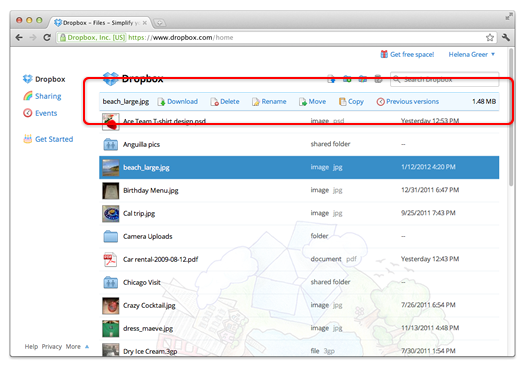 The new action toolbar at the top shows you a simple menu for sorting files by name, date, size and type. If you’ve selected a document, you’ll see options for doing things like downloading, deleting, renaming, moving, copying or checking the previous versions of it. A right-click menu includes these same options for those who prefer navigation via mouse — and  the addition of a drag-and-drop interface and multiple file selection makes bulk actions faster than the previous checkbox version. For hardcore users, there’s also hotkeys (just hit “?” to see the menu).

Photos helped Facebook get all sorts of new usage, and Dropbox is heading in that direction, too, in its own way. A new Lightbox-style photo viewer lets you enjoy all the image files you’ve saved from everywhere else, and a thumbnail preview version lets you see what’s what before bothering to open them.

Meanwhile, a search box is now built into the homepage, and updates in real-time as you type in the file name you’re looking for. 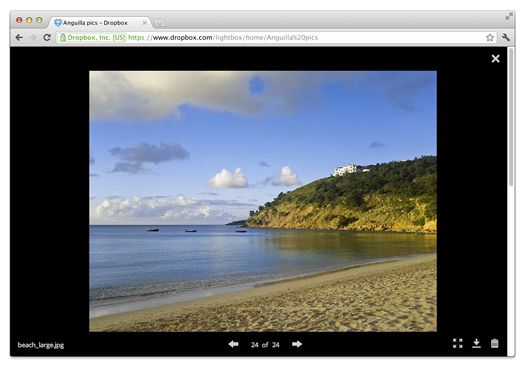 “We’re always trying to make people’s lives simpler,” product head Jeff Bartelma tells us in a separate discussion on the changes. “With this redesign, we wanted to make Dropbox as easy to use from the web as from your own computer. Millions of people need better ways to view, browse, and share their stuff from anywhere, and this is just one step of many you can expect from us this year.”

So what’s next? Houston didn’t get into it too much last night, but I talked to him last month and got a little bit more about the plans for this year. He’d told me that 2011 was about building up the company — bringing in the funding, expanding the headcount (including some top engineers), setting up its offices, winning the top Crunchies award, making a big recent acquisition, etc. — and this year is going to be about the product. Things like the redesign, and, intriguingly, its developer platform. There are a few ways for developers to use Dropbox now, but look for it to offer more tight integrations for how web and mobile applications work, as well as ways to save and share media like photos and music. Think of the automated photo-sharing service it rolled out for desktop and Android devices (including this HTC integration) as some early examples.

All this is a long way from just a few years ago, as Houston related to interviewer Kara Swisher. We’ve covered his story in detail before. The previous startup, the move from Boston, the fundraising process with Silicon Valley angel investors — check out the links to the video interviews below. But there was one anecdote that jumped out when he was talking yesterday. The now-legendary meeting with Steve Jobs.

“There were no numbers with Apple,” he said last night, shooting down a rumor about a nine-digit purchase price. “We get to the headquarters, they take us up to the board room, and Steve is there. We talk casually, he says we have a great product and he tells us how Apple is like a giant startup. So we make it really clear that the company is not for sale, and that we’re having a really great experience. I was really flattered, I mean, we’re huge Apple fans, obviously. But we wanted to build the company, it’s a unique thing to do in your life.”

“We’d heard you either get the Chill Steve or the Asshole Steve. So we tell him that and we suck in our breath waiting for the switch. He rocks back and forth quietly on his heels, and then started trolling us a little bit — ‘you guys are a feature, not a product. You don’t have deep access.'”

“He still respected us. I think he was just trying to mess with us.”

On Pitching Dropbox: “Tom Cruise In Minority Report Is Not Carrying Around A Thumb Drive”

How Dropbox Got Its First 10 Million Users

Houston: “In 18 Months, You Are Going To See Little Dropbox Buttons Everywhere”