VEVO launched officially to the world in December 2009, and in the same month became the most visited music site in the U.S. That was just over two years ago, and today VEVO has grown to be the second largest web video property behind YouTube, with some 51.5 million unique viewers tuning in to VEVO’s content in January, according to comScore.

The concept behind VEVO was to make it the Hulu for music videos, and with the company being a joint venture of Sony Music, Universal Music, and Abu Dhabi Media, with EMI licensing its music to VEVO, it has content from three of the “big four” record labels — and, thus, has had the clout to push it to the fore. Its videos are syndicated across the Web, with many of them appearing on YouTube thanks to the company’s deal with Google/YouTube in which the two companies sharing the significant advertising revenue generated from those videos.

Yet, as CNET reported last month, VEVO has reportedly been in talks with Facebook over moving its videos to the social network, as Facebook is interested in arranging a similar deal with VEVO to the one it has with YouTube, but a year remains on VEVO’s contract with YouTube, so those talks are still preliminary.

However, last week, news started to trickle out in the form of emails to VEVO users from management that, going forward, VEVO users would begin logging into the site exclusively through Facebook. The emails included news that a “new VEVO is coming,” which is confirmed today, as VEVO is officially announcing the biggest redesign to its music video platform experience since launching two years ago. And Facebook definitely has a significant place in the new redesign.

In a blog post to VEVO users, the company’s SVP of Product, Michael Cerda, said that he had long been in conversations with CEO Rio Caraeff about turning transforming VEVO from a website into “an experience,” which has come to form in a redesign that looks to boost the site’s personalization features, its social functionality, and make it more of a long-play video destination. 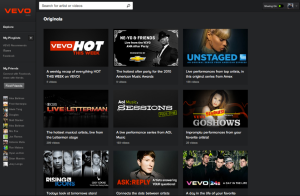 Under the new redesign, when users login to VEVO using Facebook, the site scans your newsfeed and daily Facebook data to create a personalized Facebook playlist. What this means is that if you’ve liked an artist or shared music before on Facebook, for example, VEVO will add that artist’s videos to your playlist automatically. Login, by the way, is limited to Facebook, but users aren’t required to login or register to access unlimited viewing/listening.

VEVO’s iTunes Match will also scan your iTunes library to create a playlist of music videos that matches your most listened-to artists, in addition to the ability to search for a video, watch it, and have VEVO create a “long-play viewing experience based on the stuff you’ve selected,” the SVP said.

The company is also announcing that it has teamed up with music intelligence platform The Echo Nest to help users find and discover music videos personalized to their personal preference. The integration of the Echo Nest’s music data platform into VEVO now lets fans create personalized music video playlists from its catalog of more than 45,000 videos.

Fans can also further customize their listening experience by scanning their audio music collection using a web link, at which point VEVO and Echo Nest turn the site into a sort of thematic music video platform, with content played based on the user’s favorite music.

On top of that, the company has also updated its player, which is now bigger, and (from my brief experience) plays videos faster — and continuously. The other big update to VEVO’s platform comes in its contextual changes. When listening to music, especially when discovering new music, our experience is enhanced significantly by being able to check out more information on the artist, biographical or otherwise.

VEVO’s viewing experience now includes the ability to check out lyrics (thanks to musiXmatch) to the song in the video as you watch, browse news headlines related to the artist, or read the artist’s bio without having to click away from the video. The cool thing is that the company has not only updated VEVO.com, but its iPhone, Android, Facebook, and new Xbox app (U.S. only) as well. (An iPad app is on its way.) So, this means that you can listen to VEVO while at the office, share with your Facebook friends, and continue streaming music videos on your smartphone, and connect it to the TV when you get home.

The new VEVO now gives users a viewing and listening experience that they will actually want to take with them across platforms, and on the go. It makes the experience more competitive with Spotify and Pandora than before, with the added benefit of videos. And, as to ads, always a potential deal-breaker for streaming content, ads on the site continue to be pre-roll, overlay and companion on VEVO.com, and pre-roll on mobile. The pre-roll runs about every 7.5 minutes of viewing time, and not before the first video.

And to clarify, continuous video streaming on site and for iPhone, Android, and Xbox are part of this update.

That being said, the team was clear to point out that this is really a beta launch, and it will be making further updates according to user feedback. Hopefully, as the company is a joint venture of some of the largest bodies that constitute the RIAA, they’ll also be listening to feedback in regard to its somewhat questionable stance on piracy and the events that transpired at Sundance, where Jason found more than a little suspect activity. 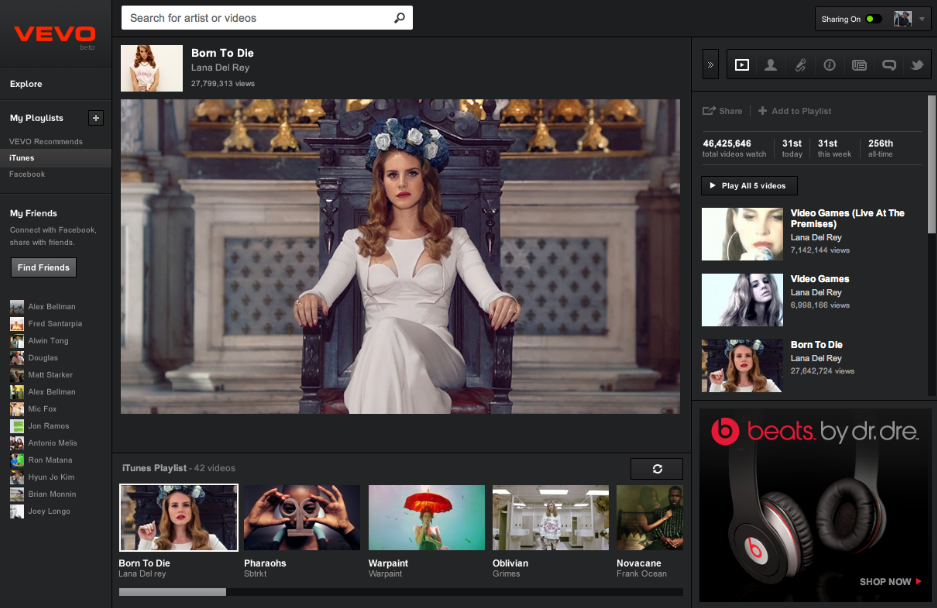