Appealing to power users and Twitter loyalists, Facebook today lets users start creating and subscribing to “Interest Lists”. You can view updates from these collections of Pages and public figures in a dedicated news feed. They’ll be discoverable through suggestions of popular list and those created by friends.

Rolling out over the next few weeks, Interest Lists could give users enough curation ability to follow friends, brands, and thought leaders in the same interface. The release continues Facebook’s battle to usurp Twitter’s control of the interest graph. The feature combined with Subscribe could be good enough to jeopardize Twitter’s long term growth. 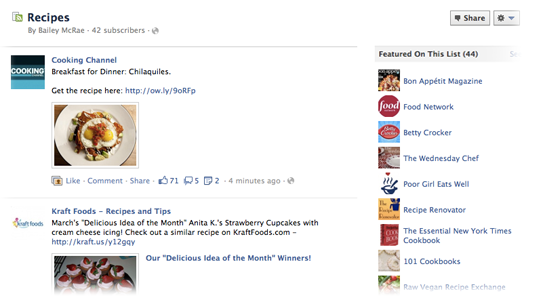 Accessed through the home page’s left navigation sidebar, Interest Lists can be clicked to switch to a view entirely comprised of stories from a list’s members — Pages and public updates from users with Subscribe enabled. Only the creator can edit a list, and they can select to make it private, or set it as public so it will appear in Facebook’s list recommendations to others.
For example, there are general lists created by Facebook such as business, sports, and style, but also specific lists such as NFL Teams which includes teams, athletes, and sports news outlets, and 2012 Presidential Candidates which features campaign Pages, candidate profiles, and political news.

When creating new lists, a wizard helps users pick from their Liked Pages, subscriptions, friends, and members of categories like Art, Entertainment, and Games. Users can also select to add a Page to an Interest List from a Page’s Timeline. This functionality actually leaked with the launch of Timeline for Pages giving us a hint that Interest Lists would launch, but Facebook quickly hid it until now. 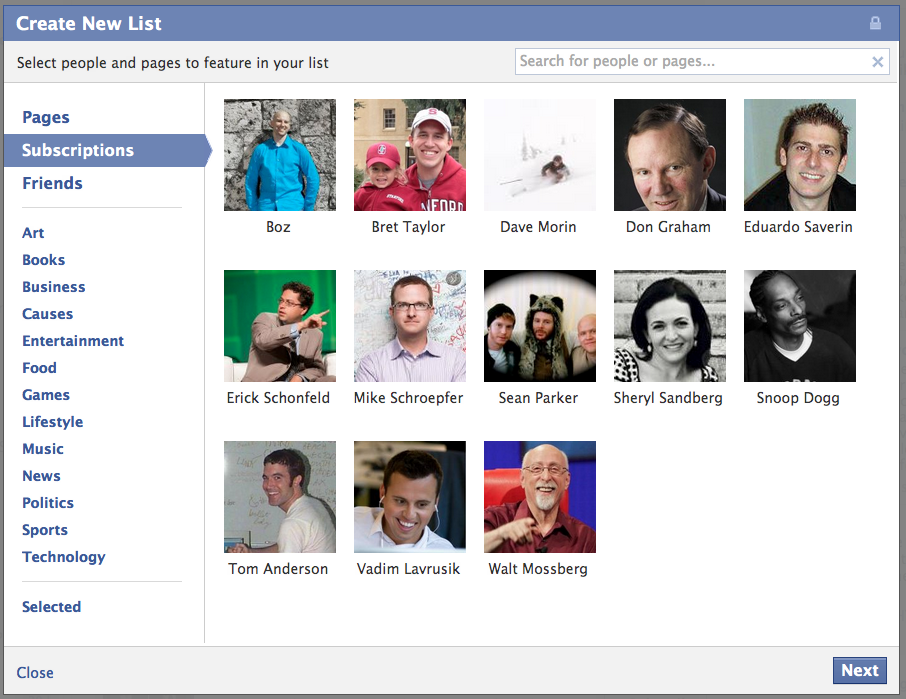 Unfortunately, you’ll also see the most popular stories from lists you’ve subscribed to in your primary news feed, which you can click through as a portal to your lists. However, this will prevent users from adding lists they might only want to check occasionally without polluting their main news feed. The only solution is to hide posts from lists one by one when they appear in the main news feed. I find it very useful to be able subscribe to a niche Twitter list without affecting my feed, and Facebook should consider switching to this functionality or making it an option.

Facebook calls the feature “a new way to keep up with the stuff you care about and tidy up your experience…Interest Lists can help you turn Facebook into your own personalized newspaper.” So in addition to targeting Twitter users, the feature could be aimed at pulling share away from Flipboard, and news aggregators like News.me.

While it may be late to the game, Facebook’s enormous user base gives it an advantage over Twitter in the war for the Interest Graph. Many Facebook users who might have one day been convinced to join Twitter could find that Subscribe and Interest Lists are sufficient. Twitter may always be best at breaking news, but many people would probably rather not start on a new social network.