Samsung revealed back at CES that it had some awesome things in store for its Smart TVs. The new models would virtually be able to “see, hear, and do” whatever you asked them to thanks to voice recognition and a front-facing camera. And today at Samsung’s media event in NYC, things get even smarter.

But the big question today is whether or not Samsung wants to dump the remote control, and the answer is that they won’t. The Smart Touch remote uses touch controls on an edge-to-edge touch surface that comprises the remote itself. The remote also comes with a built-in mic to let you talk into it should swiping your finger up or down become too tedious.

Samsung is also announcing the universal Bluetooth keyboard, which will let you interact with the new Smart TVs in a more internet-centric way, rather than having a focus on media consumption.

But Samsung is also giving us a universal remote. No, not a little box with a billion buttons or a touchscreen. The remote comes by way of the software itself and Samsung’s new TVs, including the dual-core processor toting ES8000 LED TV, which will turn virtually any Samsung device and/or yourself into an input method.

Joe Stinziano, Senior VP of Samsung Electronics took the stage, to announce the ES8000 with Smart Interaction (a combination of voice control, facial recognition, and gesture controls). It has that thin bezel and a U-shaped stand, just as we heard it would back at CES. 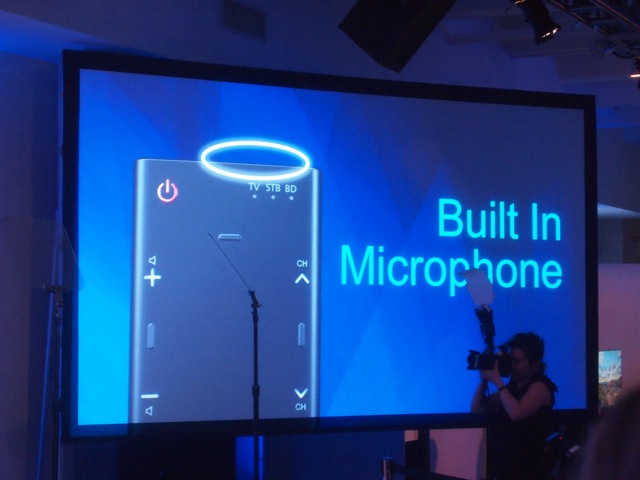 The camera on the ES8000 LED lets you swipe through apps with your hand, and all you have to do is close your hand to click. The camera also has a built-in microphone, so you can change the channel and perform other commands without even lifting a hand. That means you could be Skyping from the couch on a big screen. It’ll also come equipped with a Bluetooth IR Blaster.

The ES8000LED also comes with Samsung’s new Evolution Kit, which will allow users to update the software platform and other goodies without having to upgrade their hardware.

Evolution Kits will come to market in 2013.