It may have taken longer than even its own creators might have guessed, but it’s finally come to pass: Brizzly, the Twitter/Facebook client that was bought by AOL as part of Thing Labs in September 2010, is shutting up shop at the end of March, with the news announced last night on Brizzly’s blog by Grant Shellen, and co-signed by Zachary Taylor and Jason Shellen, Brizzly’s and Thing Labs’ co-founders.

Behind the move to shut down Brizzly is another story, it seems, about what is going on with AOL and its social media ambitions for its instant messaging service, AIM.

Since the acquisition of Think Labs, the team, according to the blog, has been putting most of their efforts into AIM.

“Once we set to the task at hand—improving the hell out of AIM—we had little to no time to work on Brizzly, and it became clear that the new things we’re working on are far more worth our time and attention,” Shellen wrote.

That has included a re-vamp, launched last month, which has tried to make the product significantly more “social”: there is now an expanded group chat function; as well as updates on when people have mentioned, liked, followed or commented on your Twitter, Facebook and Instagram content; and email alerts for AOL Mail and Gmail.

But it is not a replacement for Brizzly because the one crucial thing it doesn’t do is incorporate those social media feeds themselves. Why wasn’t that included? It might appear in a later incarnation, but for now the impression is that AOL, ideally, would like to keep all potential interactions in its own garden. (And in any case, that is what is happening as a result.)

Yes, it seems that AOL definitely wants to keep its place at the social media table. However, its chair seems to be getting increasingly creaky.

AOL does not say how many active users there are on AIM right now, but the picture doesn’t look very good. In the company’s last quarterly earnings, AOL noted that AIM numbers were in decline (with those declines being offset by the Huffington Post Media Group, of which TechCrunch is a part).

There are also reports that AOL is gearing up for a round of layoffs that could include AIM itself. A report in Bloomberg notes that Jason Shellen, the ex-Thing Labs founder who now runs AIM, might seek a buyout in the next few weeks. Update: Jason Shellen himself has confirmed he is leaving AOL in early April. “The new AIM is looking great & is in good hands so I’ve decided to leave AOL. I’m moving on in early April & am excited about the future!” he wrote on Twitter.

ComScore (yes, they can be problematic) estimated that as of October last year, AIM’s active users in the U.S. were at 4.9 million — a decline of 65 percent a year ago (that’s not including mobile and tablet access, just PC). It’s now third behind Yahoo Messenger and Windows Live Messenger from Microsoft.

I don’t know how many users Brizzly had (I’m trying to find out and will update this when and if I do), but it was a cool and useful service. Now, the talented folks from Thing Labs, rather than working on totally new, groundbreaking products, are clearly doing some interesting work in getting the decidedly more legacy AIM up to speed. But whether all that effort will be enough to bring up user numbers — and subsequently create revenue streams — remains to be seen.

A worrying trend for this strategy is that in general the IM market appears to be getting less popular — possibly propelled by users more focused on Facebook, Twitter and the rest of the new guard. ComScore notes that usage of IM services in the U.S. dropped by 31 percent over the year to 36.8 million visitors.

Worldwide, where AOL ranks in 10th place among IM providers, there are some interesting pockets of growth, but they are mainly outside of the U.S. and in China and Russia, says comScore, which provided us with comparative numbers between January 2011 and January 2012: 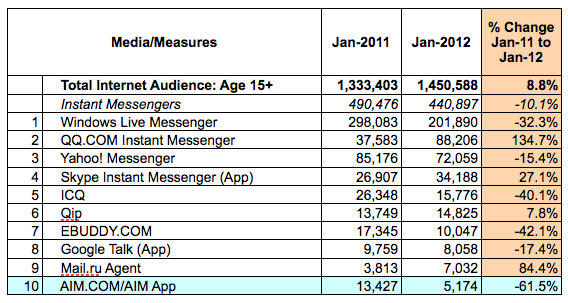 In other words, a social media plan focused around AIM is either very, very visionary or going totally against what appear to be pretty strong market indications.