It’s a tipping point of sorts: smartphones are not (yet) being used by the majority of U.S. residents, but among mobile users, it looks like they have now outnumbered those on lower-end devices — or so consumers think — according to research out today from Pew.

As of February 2012, 46 percent of the 2,253 adults surveyed said they are now smartphone owners — growing 11 percent in the last nine months, while 41 percent of adults own a device that is not a smartphone.

What’s interesting is that these are averages, meaning that we really are seeing a critical mass affecting different demographics. The numbers are actually significantly higher in certain age groups like young adults: among college graduates, 18-35 year olds and the well off, those who said they used a smartphone was at 60 percent and up.

(The converse: very low numbers in another group, those aged 65 and up: only 13 percent of them own smartphones.)

Unlike a lot of the market research that comes from the likes of IDC, Gartner, Strategy Analytics and so on, Pew’s findings are not based on “channel checks” with operators and retailers and vendors who ship devices; rather, they are based on how users describe their mobile status.

In a way, that is almost a more telling indication of what is going on — especially if you compare the numbers against those provided by the analyst firms.

For example, Pew found that only 20 percent of mobile owners said they owned an Android device. That was only a rise of five percent on May 2011. Some 19 percent describe their phones as iPhones, a rise of nine percent on May  2011. BlackBerry went down to six percent from 10 percent in May.

Given that by many accounts Android is outnumbering iOS — recent numbers from comScore put the percentages at 47.3 and 29.6 percent — that says something about the brand currency of Google’s Android and how many people actually seem to consider that when they are choosing and using smartphones.

Branding and the idea of users staying loyal to their platforms is one question; another is around how these devices get used.

If the great promise of smartphones is to get users connected and communicating in ways they haven’t been able to do before, it’s something of a reality check to see that today some eight percent of mobile owners still couldn’t say with certainty whether they owned a smartphone or not. At least that number was down from 14 percent nine months ago. 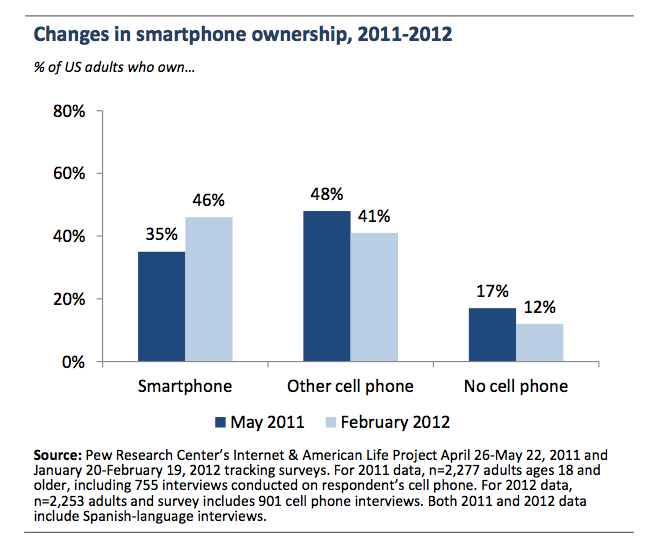