If Windows Vista was Microsoft’s folly – a mish-mash of ideas not fully baked and aimed at multiple constituencies – Windows 8 is Microsoft’s rebirth. To get ecstatic about it isn’t quite the direction I’d like to take this mini-review, but let’s just say that Microsoft is on the cusp of getting things right.

As we said before, Windows 8 will ruffle a lot of feathers. The first and most obvious comparison is with the new Windows Phone interface. The “Start” menu is gone, replaced by what amounts to the entire Metro UI. This UI – the one with the multiple, animated squares, is the one that matters. 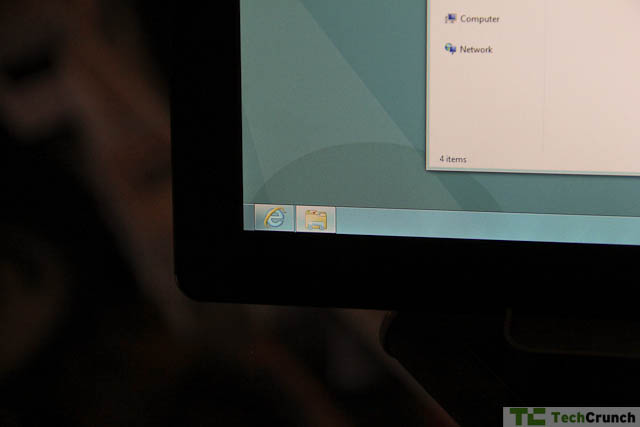 Then there’s the Explorer. Every so often – and it will happen more in the beginning of Win8’s life cycle, the OS drops into “original” Windows, the Windows of tiny, uselessly-labeled buttons and overlapping windows and notification screens. Gone are the tiles and gently pulsing images, in comes Windows 95.

Woe betide Microsoft for maintaining ties to the original Windows with this odd accretion of functionality – they’re going to be ripped apart by the blogging masses – but this is the second time I’ve seen the interface and I’m accepting of the compromise. Going from Metro to “Windows” is like going from the Museum of Modern Art to a bodega across the street. You’ll get more done, but damned if you don’t miss the cool, calm design and attention to detail. 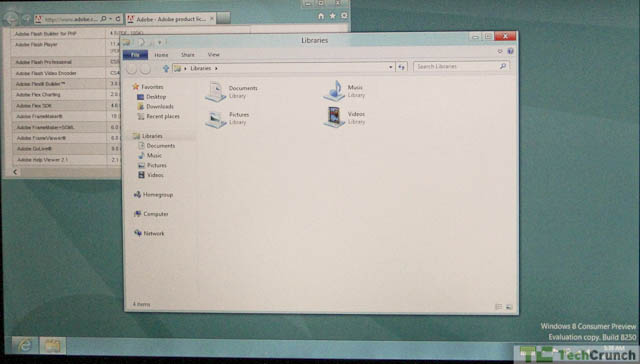 The improvements made in this version include a split keyboard for improved on-screen typing, considerably improved gestures including a cool “left side swipe” that brings up all running applications, and improved PIM apps like Mail and Calendar that are so far from Outlook as to make Outlook look like a steam-powered Rolodex. SkyDrive interactivity allows users to keep their settings, downloaded apps and content, and look and feel from PC to PC, a very interesting concept that bears further examination. 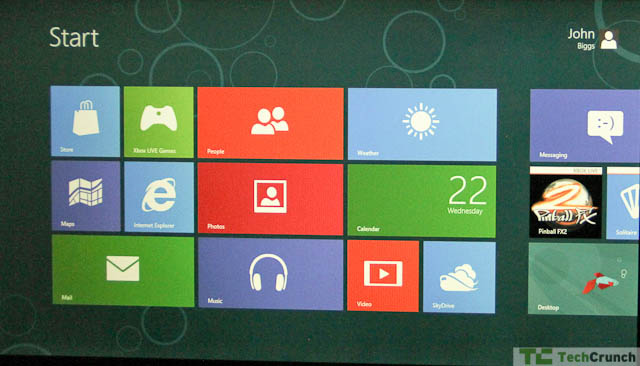 As we noted earlier, Windows Live is gone, replaced by Microsoft Account. The distinction is an important one. In short, Microsoft Account allows IT managers to distribute apps, settings, and files to any computer, anywhere, including mobile devices. You could log into a friend’s computer and see all of your SkyDrive files and have access to app downloads. Even your wallpaper will move over. Then, when you log out, all that data is gone. That’s how it works in theory, at least, and it should improve an IT guy’s life immensely.

This goes hand-in-hand with improved battery life and performance. Win8, dependent on fairly efficient on-screen animations, reduces the need for heavy duty graphics activity. I asked Microsoft if there are any savings associated with what amounts to a vector-based graphical interface and they said that the OSes energy efficiency is much improved over previous versions. Just stay out of the wild jungle that is the Windows Desktop and you’re good.

Developers will be pleased with the cool new Metro UI and, more important, the concept of “contracts,” a sort of pipe-slash-API that allows apps to share pieces of data. Search is the most interesting application of these contracts. For example, when a user performs a search, all of the apps on the device offer up their own contracts. Once you start to drill down into a search, these contracted apps expose what they’ve found during their own searches without exposing anything else. Think of it as a roll call for apps where the OS requests some data and the apps reply in turn. The same goes for sharing. Twitter and email sharing become integral parts in the sharing experience when those apps make their contracts visible.

Microsoft is actually playing down the compromises it has made with Windows 8, focusing instead on their road map for future features. Win8 is not an accretion of functionality over an old platform. It is, instead, a rethinking of the Windows experience that will leave many queasy. While it’s fun for us to go swiping along through tiles and writing contracts with daemons, it’s going to be a massive change for “regular” users who are used to the old mouse-and-window way of doing things.

The question is whether Microsoft can offer a compelling reason to rewrite apps in Metro (they will) and whether users will take to Win8 as quickly as they did Win7 (I’m not so sure.) A fleet IT buyer will look at Windows 8 and wait things out but the move will be inevitable, especially as users begin expecting Metro and keep getting XP.

In the end, Windows 8 is a massive change and an obvious next step. The OS leaves competitors in the relative dust, at least in terms of usability, and paves the way for a world of touchscreens and Kinect-like interaction.

A side note: as evidence of the difficulty folks will have at getting used to this new OS, I forced myself to use Win8 for most of last week, hooking it up to a big monitor and connected a keyboard and mouse. Oddly, as much as I loved the concepts, I just couldn’t quit the old icon/window interface of OS X. This isn’t a critique of Win8 in its current form simply because the OS isn’t finished yet. It’s an acknowledgement of the mental models that Microsoft has built up inside us for decades now and an understanding that the road ahead will be a hard one – but the destination will be worth the slog.