Typically, when I think of an “early adopter,” French President Sarkozy doesn’t come to mind. The man who announced his intention to run for reelection on February 12th didn’t even have a verified Twitter account prior to that date. Fortunately for him and his campaign, he now has a verified account with over 97,000 followers. He has even made it clear that he signs his own tweets with NS.

After signing-up for Twitter, he went on to reveal his Deezer music playlist. His account reveals his taste for everything from Elvis Presley to Carla Bruni (his wife, duh)…and also mentions that he joined the music streaming platform on February 21, 2012. Talk about a late bloomer.

But even if Sarkozy is finally catching on to social media, his social strategy may need a little fine-tuning. Just hours following his announcement to run for reelection, numerous Twitter accounts parodying the French president were suspended for impersonation. Accounts that had existed since September 2010, like @_NicolasSarkozy, were informed that they needed to change their username and avatar. While some may argue that impersonation on Twitter is an issue – as was the case with @ceoSteveJobs – Twitter offers verified accounts for that very reason. Now that Sarkozy finally has one, I can’t really wrap my head around what all the fuss is about (other than a lacking a sense of humor).

So far, Sarkozy is the only French presidential candidate to take on such an anti-social strategy. His opponents, including socialist candidate François Hollande, are yet to take  a similar stance. Check out one of his parody accounts:

But just because Sarkozy has managed to silence the parody accounts on Twitter doesn’t mean that he’s silenced them all. For one, there are still some remaining accounts on the micro-blogging platform that are still up and giggling (see below) – though I’m sure his team will crush them soon.

That said, he’ll have to go well beyond Twitter if he wants to stop all the impersonation entirely. Here’s a parody account on Pinterest that includes some fabulously-titled, boards including ma meuf or “my woman” (obviously featuring pictures of his wife, Carla Bruni), babioles or “trinkets” (featuring images of fancy pens that he “stole” and expensive watches) and yachts. 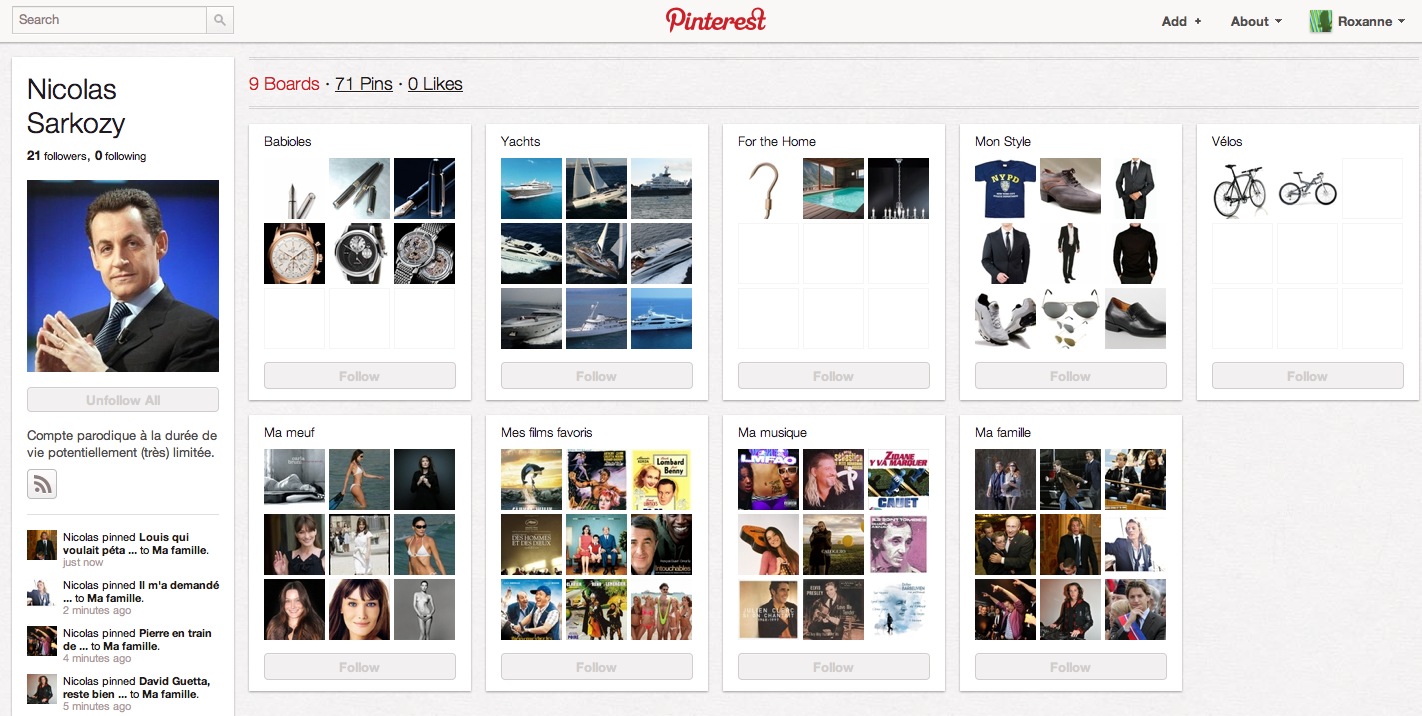 The person who is behind this fake Pinterest account knows that it may have a short lifespan – which he or she has clearly noted in the byline. So be sure to enjoy it while it lasts :)

Credit: Thanks to Pierre Lafon for the tip.

This is a guest post by former TechCrunch France Editor, Roxanne Varza