In the world of mobile handsets, LG has been steadily losing market share to companies like Apple and ZTE in their collective march to catch up to market leaders Nokia and Samsung. But in the world of Twitter, LG is apparently winning.

According to some number crunching from Twitter analytics firm Anly.tk, LG in the last week has blown away competition from rival handset makers, and even Google’s Android, to become the most talked-about brand in the last week in all Twitter conversations related to MWC.

Analyst Toby Proctor notes that HTC, which had been in the top slot a week ago, has now dropped down to fifth position. Android is a strong second, followed by Nokia, which will be making all of its announcements on Monday (we’ll be there).

LG has certainly had some notable news around it in the last week. That’s included reports of a uber-powerful quad-core handset among some seven new Android devices; and a handset that will run a new mobile OS from Mozilla (something the company had hinted it might do back at CES).

There are some other trends pointed out by Proctor. One is the rise of MWC chatter in Korean, LG’s home market. Proctor says that 20 of the top 200 words in chatter have been Korean. In the wordcloud pictured here, those words are represented by “OOO” because Proctor hasn’t worked out a way of representing those characters yet.

Proctor tells me, however, that he doesn’t think that rise of Korean tweeting has contributed to LG’s rise, though: more of it, he says, has been related to another Korean company, SK Telecom.

The most shared news items are an Android tweet about new pin designs (they gave away pins last year; people got excited); a tweet linking to Ubuntu’s availability for Android; and a pickpocket warning for Barcelona, appropriately from the Robbed in Barcelona blog.

With news of Samsung’s latest Galaxy phone hitting the wires today, and HTC holding its press event later on (we’ll be there, too), it will be worth watching whether LG can keep its top slot — or whether, as in a sprint race, LG has come out in front early only to drop back down when the top runners really get their momentum. 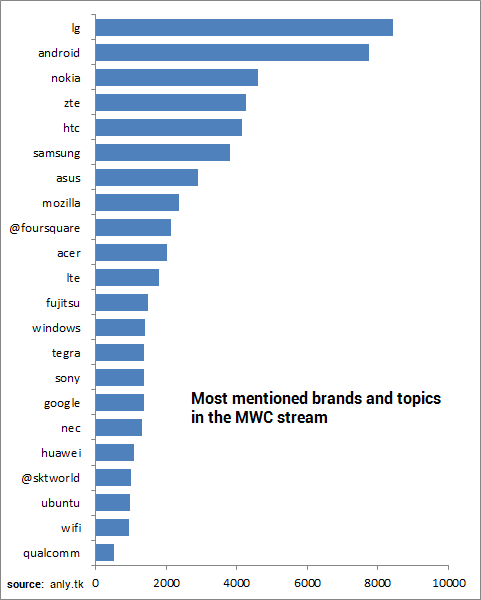 (thanks to Dan Warren for the tip)