If you want to see what your friends or contacts are up to, you can check out Facebook, Twitter, LinkedIn, or Instagram for a realtime feed. But what if you want to read news about your friends? That’s a little bit trickier, which is why Newsle was born. Axel Hansen and Jonah Varon created the site in early 2011 as a way to find out more about what their friends and people they met at school were up to during the summer, and beyond. At the time, Hansen and Varon were sophomores at Harvard, but they’ve since taken leave and have moved to San Francisco to focus on Newsle full-time. (Sounds like a familiar story, doesn’t it?)

At conception, Newsle mostly focused its efforts on becoming an archive for interesting (older) news about friends and people you care about. (You can read Erick’s early coverage here.) But, in testing the idea with its some 10K beta users, the founders discovered that it turns out most people have friends who are in the news every single week. And this doesn’t just apply to those in the tech industry, nearly everyone has an acquaintance or five that appear in local papers, blogs, and beyond.

The startup’s beta users wanted a better way to keep track of their friends, loved ones, and contacts popping up in the news in realtime. So, Newsle has been heads-down in stealth mode for the past nine months building technology to enable this kind of news-based friend-tracking, and the new version officially launches today.

In its new garb, Newsle has basically built a massive RSS feed crawler that processes more than 100K news sources every day, culling together over 1 million articles from major media outlets, blogs, as well as local publications. The startup allows you to then pull your Facebook friends and LinkedIn contacts into its engine so that it can serve you a stream of news content that focuses on the people you want to stay in touch with. Users can then Facebook message or tweet the people they’re following directly from Newsle’s web interface. Or they can drill down, set more specific alerts that get sent to their inbox daily, weekly, and so on.

Users can not only follow their Facebook and LinkedIn friends, but also choose from a list of celebrities, comedians, actors, and business people, staying on top all news related to Lady Gaga. It sounds a little stalker-ish, but it’s a great tool for, say, startups looking to keep tabs on VCs, or for my many fans to keep track of my posts. (You’re welcome!) The founders tell us that they really wanted to pick up where Google Alerts leave off, focusing on friends and people we care about. 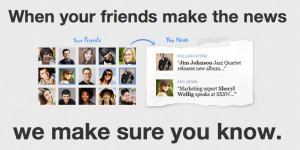 As Erick pointed out, if Newsle sounds familiar, it’s because the idea has been tried before in various incarnations, most notably Rohit Khare and Samil Ismail’s now-defunct Angstro, which eventually morphed into Knx.to to be later acq-hired by Google. Previous attempts haven’t been successful, but Newsle has a great UI to recommend it, works well, and looks snappy.

Obviously, tackling the enormous amount of news content out there on the Interwebs is no easy feat. The service will really live or die based on how relevant the content is that it serves to its users. Right now, since quite a few other TechCrunch writers are my friends on Facebook, Newsle is serving me their posts on TechCrunch, but if you’re looking for news about those people, and not written by those people, that could be a strike against. It’s no easy thing to separate the equivocating metadata or profile information that comes with bloggers’ news posts.

The founders have been hard at work creating and fine-tuning these disambiguation algorithms that allows Newsle to, among other things, distinguish between commonly occurring names in the news and those who are actually your friends. With so much content coming into its silo, that can be tricky.

But that’s where funding can come in handy. Newsle is officially announcing today that it raised $600K in seed financing from Lerer Ventures and SV Angel. The startup is using its new capital to hire engineers to help in tweaking its algorithms, and to launch mobile apps (which should be going live in the near future).

Newsle is still early in the process and hasn’t yet solidified its monetization strategy, but one can imagine that a service like this would be appealing to businesses, especially to marketers and sales people. The founders also said that they will add further local news sources as more users come on board, and they get a better sense of which particular outlets are most in demand.

While the goal has really been just to build an open-ended resource that allows people to track news about their friends, it also wouldn’t be surprising to see the startup eventually offer more targeted, subject-specific content and tracking.

For more, check out the new, new Newsle at home here, and let us know what you think. 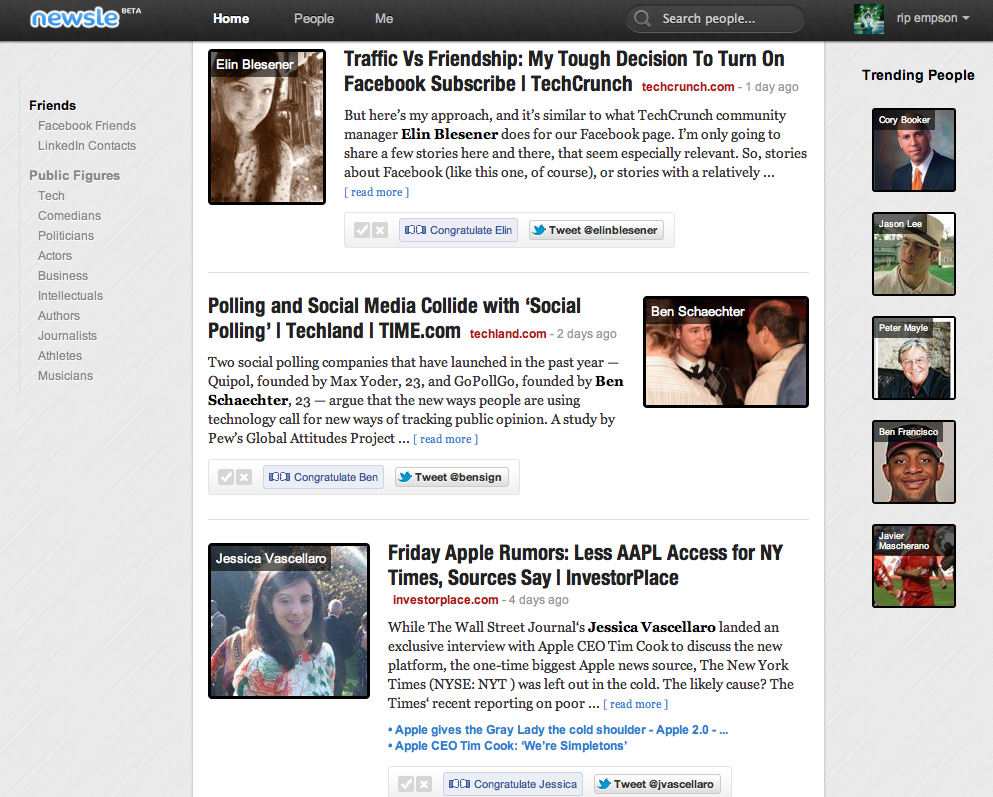