Are you enough of a photo geek to build your own camera? Maybe. But are you enough of one to build it out of LEGO and some spare bits you had lying around the house? Probably not. But Carl-Frederic Salicath over in Norway is. And he did. He calls it the Legoflex B1.

The body of the camera is entirely LEGO: normal bricks for the outside, and some Technic pieces built to hold the 120mm roll film the camera uses. It even has a rewind lock so the film doesn’t unravel or turn the wrong direction. The lenses are from a pair of binoculars (optically the same) and the aperture is a single Technic piece that has a hole in the middle. 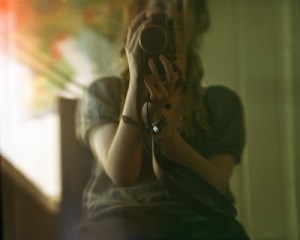 Twin-lens cameras like the famous Rolleiflex have two identical lenses one about the other, with one bouncing off a mirror so you can compose, and another exposing the film. The design is made to minimize moving parts; the focus is adjusted by moving the lens back and forth, and in this case the exposure is achieved by sliding a one-brick-wide plate with a slot in it across the path of the light. Obviously getting a correct exposure is something of a challenge. But it works, as his sample shots show.

When you think about it, cameras can be fairly simple. Pinhole photography and things like solargraphs are as simple as it gets and work by basic principles of optics. It’s when you start adding things like autofocus, adjustable aperture, and restricting the depth of the camera that things get complicated — and expensive.

Head over to this blog entry for detailed info on how the camera was built.