YC-backed Glassmap is a new mobile application publicly launching today that presents a viable challenge to realtime, location-sharing apps like Apple’s Find My Friends or Google Latitude. Where those two competitors focus on enabling social experiences on top of their own platforms or ecosystems, Glassmap is enabling a third alternative: realtime location tracking built on top of Facebook’s social graph. Yes, it’s like a “Find My Facebook Friends.”

However, this app isn’t using Facebook check-ins to track your friends – it’s actually tracking them in real time, by running the app passively in the background. And that’s where Glassmap’s killer feature comes in: the startup is using “relay” technology to minimize the typical battery drains associated with realtime location-sharing apps today.

To use Glassmap, you first have to authenticate with Facebook, then invite those friends you want to share your location with. For obvious reasons, it’s not going to immediately start tracking all your Facebook friends upon first launch – it’s an opt-in experience, and one that requires either an iPhone or Android. However, even if you don’t explicitly invite a Facebook friend to join, but they install the app on their own, they’ll show up in your friends list. If you would prefer they don’t see your location, you can toggle a switch to block them. 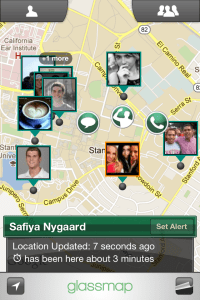 Overall, the app itself is simple. There’s nothing much more to it than a Google map, a settings screen, and list of online and offline friends. But in this case, the simplicity works in its favor – the app is incredibly easy to use.

Glassmap was founded by Geoffrey Woo, Jon Zhang  and Jonathan Chang – three Stanford engineers who dropped out from their Stanford MS programs to start the company. They specialized in distributed systems, circuits, web and mobile development and industrial design.

It’s this background that helped them design what may be Glassmap’s best feature: its relay technology. Before, typical location-sharing apps would drain a smartphone’s battery at about a rate of ~5% drain/hour. Glassmap, however, claims to be an order of magnitude (~0.5%/hour) more efficient. To accomplish this, its servers dynamically push and pull data from client devices. The server, which stores the state or context of all Glassmap clients, has more data than any one client has. This framework allows the app to take advantage of what’s happening locally and socially around the user to fix location more efficiently than having the app update every few minutes or as you change cell towers.

“For example, if it’s 3 AM at night, and no one’s actually trying to look for you, there’s no reason to actively update your location all the time,” explains Woo. “But if I’m trying to meet up with you, I can pull in your location data dynamically, and I can do that in real-time, without killing the battery.”

Although today is Glassmap’s public debut, it was actually soft-launched earlier this year on college campuses, starting with Stanford, where it’s now used by an estimated 10% of undergrads. As of today, Glassmap is live on 10 college campuses, and the company’s goal is to reach 50 more over the next 3 months.

While the big goal is to build a better location-tracking application through technology improvements, there’s also a company philosophy that realtime location sharing is the future. They believe that startups like Foursquare, which requires manual updating, represent out-of-date technology.

“We think that check-ins are an artifact of technology. We think that they’re a middle step in what location sharing will eventually be like,” Woo explains. “Having to pull out your phone and manually tag a location is pretty low-tech.”

He’s really not kind to the lowly check-in, referring to check-ins as everything from “a fad” to “a novelty” to “a lot of work” throughout our conversation. But while Foursquare, for now, seems married to the concept of the check-in, it could move to automate or speed up the process for its users, while avoiding the privacy concerns of automated location tracking.

What Glassmap pushes us to ask ourselves, is whether our realtime location can form the basis of a new social service beyond the college kid set, or whether realtime tracking an area that’s still best for family locator apps.

Glassmap thinks it can be both. “We think there’s so many applications for location,” says Woo. “while we’re focusing on the market we understand the best [colleges], we want to be the general, de facto location sharing service. That is the ultimate goal.”

The team was a part of this summer’s Y Combinator program, and also has funding from SV Angel and StartFund.