Brands on Google+ are seeing tremendous growth in followers, according to a new report from SEO and digital marketing startup BrightEdge.

Google+ was famously closed to brands when it launched, something that changed with the launch of Google+ Pages in November. Now, the number of users following the top 100 brands on Google+ has increased 1400 percent, from 220,000 in December to 3.1 million in February, BrightEdge says.

In fact, the top brand, H&M, has more followers now (462,000) than all of the top 100 did in December. The report says most of the growth is happening in the top 10 brands, who have 10 times as many followers as brands 11-100 combined. BrightEdge CEO Jim Yu says that on social networks, it’s not unusual for bigger brands to dominate, but the degree to which that’s true for Google+ is “a little unusual.”

Yu describes this growth as a natural step in the evolution of brands on the site. First, they had to create Pages. Now they’re amassing followers. Once they have those followers, they can start thinking about different ways to engage those fans. (So it may also be too early to start looking at other types of engagement data.)

Another sign of maturity and growth, Yu says, the fact Google is no longer the most-followed brand (although it’s still in the top 10). The report also highlights a few of the brands that don’t have a presence on Google+ at all, including Goldman Sachs, Microsoft, and Apple.

Oh, and just to give some perspective, the report says the consumers interacting with the top 100 brands on Google+ still add up to less than 1 percent of the number on Facebook. 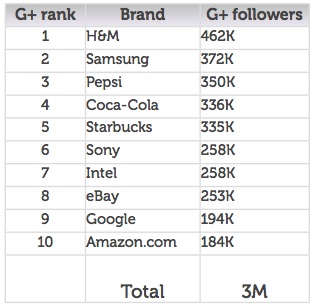