In case you haven’t noticed, the Internet has become a content fire hose. There’s a lot of junk floating around out there (my posts not included, of course), and, as a result, a spate of digital readers and aggregators have popped up to offer our blood-shot eyes improved filtering mechanisms that channel the noise into signal. Some of them even get snatched up by Twitter, a la Summify.

One of these startups, the Summify competitor and Utah-based XYDO, launched in May of last year, followed shortly thereafter by closing a $1.25 million round of series A financing from EPIC Ventures and a host of angels. But, in case you’re unfamiliar, XYDO’s value proposition has essentially been that it creates a social news platform that combines the best parts of Digg and, say, Hacker News, on the back of technology that combs a swath of content to serve you with relevant, curated news from trustworthy sources.

Initially, XYDO (pronounced “zy-doo”) focused on offering its socially curated, personalized news streams through a consumer-facing web platform. It quickly followed that up with XYDO Brief, which capitalized on this renaissance of email newsletters by delivering the same news it curated based on users’ social interactions, networks, and foot prints on its web platform — via your inbox.

XYDO co-founder Cameron Brain, who, besides having a great last name and holding three patents for his innovations in the delivery and display of video on mobile devices, told us that XYDO Brief was launched as a kind of side project — after all, curated email newsletters were nothing new. But, to the team’s surprise, XYDO Brief quickly became the most popular aspect of the service, with a bunch of tech industry honchos signing on. (TC’s Erick Schonfeld is a subscriber.)

In addition, XYDO’s curated content sources found a foothold among businesses looking to offer relevant, popular content to supplement their existing marketing services. As has always been true, content is king, but many businesses, blogs — really any service with a web presence — struggle to create engaging content, generate and convert leads, and establish themselves as viable (or at least interesting) content producers.

Due to flagging interest in its web platform, XYDO is officially announcing today that it’s pivoting to a business-to-business (B2B) approach. For those familiar, you may have noticed that the startup’s homepage looks a bit different today. That’s because the team is doing away with its existing social news platform (though it will continue to offer XYDO Brief to the public), and is instead taking a semi-PaaS approach, launching an email marketing solution for businesses.

The company has already signed on a roster of companies, including the Utah Jazz, Lendio.com, Interbank, and BYU Athletics — to name a few. Most of them are Utah-based, as the co-founders are of the mindset that, if you can’t get adoption in your own backyard, then you might as well call it quits. To that end, XYDO sent over 12 million of its curated emails on behalf of its customers.

Again, most businesses have a story to tell, and a brand to hawk along with that story, but many find more than a little difficulty in sharing that message in a way that is authentic, relevant, and drives engagement. Typically, when businesses look to bolster their content production, they employ bloggers, try their hand at blogging themselves, or hire a team of awkward interns to produce that content.

Businesses have also been saturated with the “you have to get social, or perish” message, and try to create content for social networks to boot, but that usually just means they manually copy-and-paste their stories into social feeds. Some even outsource content production to foreign lands, paying a sweat shop of quasi-bloggers $10K a pop to create content for their Facebook brand pages. All in all, it’s an expensive, time-consuming, and messy process.

Thus, XYDO has developed a white-label email solution that goes out to sources like Reddit or Drudge Report, finds the hottest, freshest content (piping hot), and includes it businesses’ Twitter streams, on their sites, etc. That’s really XYDO’s secret sauce: It’s not just about finding content that’s relevant to the business and their audience, but within those topics, locating a small subset of content that’s accelerating on the Web — just starting to become popular. Using the same tech behind XYDO Brief, which analyzes up to 300K articles per day, and then matches it against some three million influential, social media taste-makers, keeping score of what’s being shared, accelerating the velocity metric associated with that content. 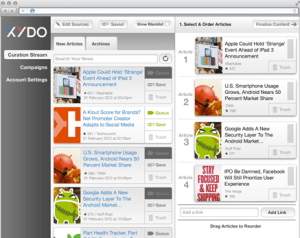 You want 10 articles on startups or banks and loans? XYDO wants to give you stories on those topics that are just starting to take off, in near-realtime. Not unlike a Hootsuite for email, XYDO’s platform offers the ability to produce these weekly curated content reports, personalizing content feeds by category, schedule email newsletters, and so on. The new XYDO will do all the curation for businesses, and let them control it from a single dashboard.

The startup is also offering re-targeting services via Google in addition to their own analytics, which analyze and present data (on a per subscriber basis), like what links subscribers are clicking, how they’re sharing and interacting with the content, etc. The goal is, simply put, to try and limit the amount of spam businesses send to their customers, while giving them share-able content and the tools to measure its share-ability.

Another result of the startup’s pivot? It’s becoming a paid service, with pricing being dependent on the size of a company’s subscriber list. On the bottom end, the co-founder says, businesses would pay about $250 a month, while larger list customers can pay up to $1K. (More on pricing here.)

While some XYDO fans won’t be thrilled with losing its consumer-facing social news platform, the truth is, many entrepreneurs and startups are catching on to the value of creating B2B services. It’s difficult to resist the urge to build for the consumer web, what with the funding available, and the hopes of millions of users, but the B2B and B2B2C spaces, generally have lower barriers for entry, and business models are more defined.

As I wrote here, there are lots of B2B companies out there that don’t have millions of users and may not be sexy at first glance, but they have solid, sustainable customer bases, and enough revenue to continue building.

XYDO is hoping that by taking a B2B approach, it can ride the growing wave of content marketing and businesses demand for smart solutions to the marketing and content engagement issues — to glory. The XYDO co-founder said that email is just the beginning, next they’ll look to implement additional publishing tools, further extend functionality in social media, likely in the form of designing tools to help businesses automate content publishing in their Facebook feeds, etc.

I think it’s a smart move. XYDO wasn’t seeing the kind of user adoption they wanted from their web platform, so they’ve pivoted to focus on bringing their email service to businesses. They’re currently in the process of inking deals with companies that have 3 million+ sized subscriber lists, and with that, they are able to gain a ready-made audience. No more having to fight tooth and nail for one subscriber.

For more, check out the startup at home here. What do you think, readers? A smart pivot? 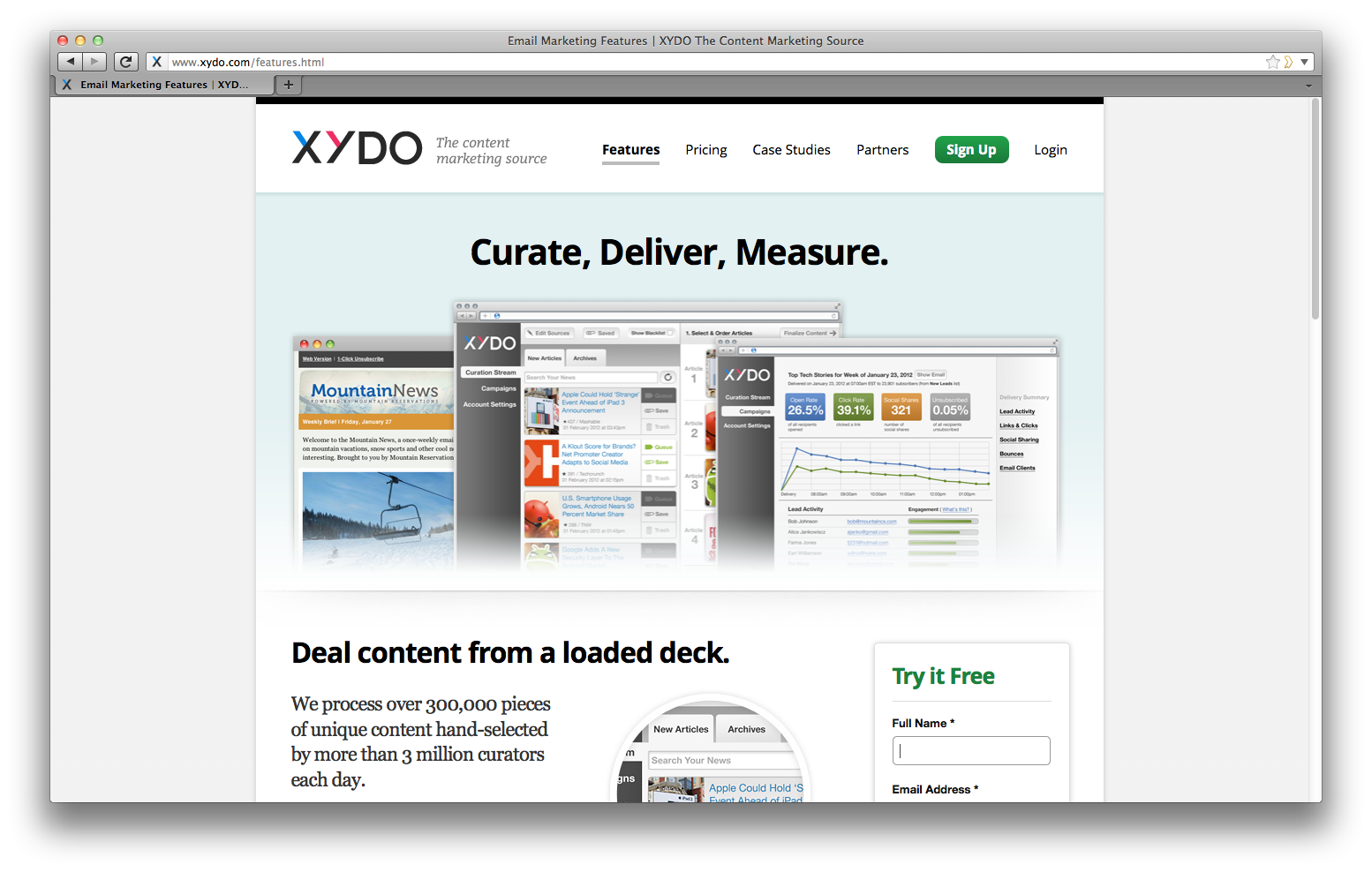