Facebook’s late-comer HTML5 mobile app platform lags way behind the Apple App Store and Android Marketplace. Yesterday I spotted Facebook’s latest effort to catch up — a test showing bookmarks for third-party applications at the top of the mobile news feed. Currently, Facebook buries HTML5 app bookmarks at the bottom of its mobile site’s pull-out navigation menu, and only shows them in the iOS or Android Facebook app’s search bar.

Placing them much more prominently atop the mobile home page could increase engagement — the first step in attracting developers to the platform and earning money on in-app purchases.

The Facebook mobile app platform launched in October to help the social network start monetizing mobile through in-app payments on which it collects a 30% tax. Apps run through an internal web browser within its iOS and Android apps, allowing it to circumvent Apple and Google’s tax. 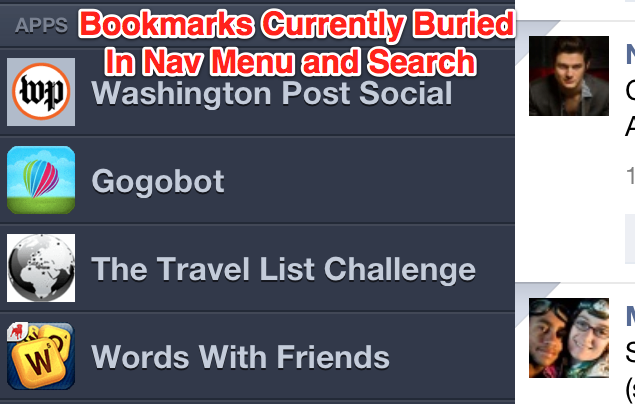 However, the platform hasn’t gained serious traction with developers or users, and that’s a serious risk the company noted in its S-1 filing to go pulbic. Some developers don’t want to re-fork production to support HTML5 in addition to iOS and the various Android versions, at least not until Facebook’s platform is a proven money maker. HTML5 also needs time to mature before it can handle the most advanced native apps. 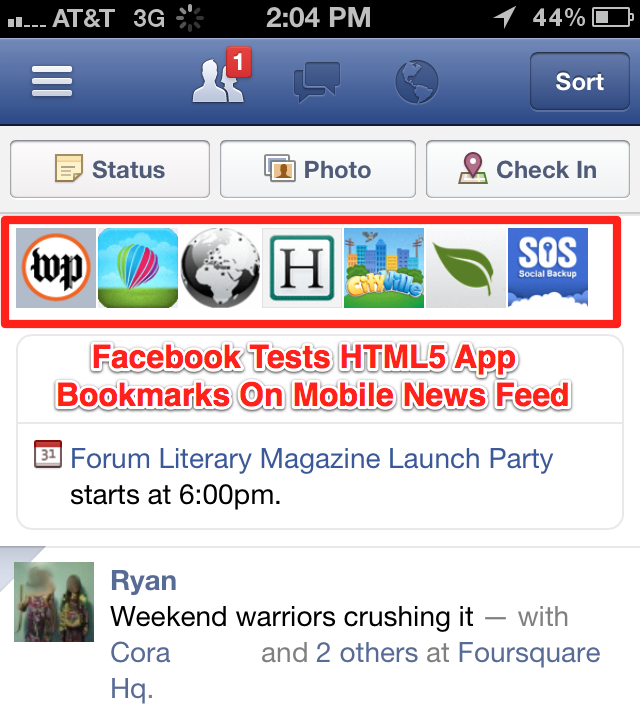 With limited choice, and no ads to promote third-party apps within Facebook’s own mobile apps and HTML5 site, users aren’t installing them in the first place. Since bookmarks for the HTML5 apps are only found at the bottom of the Facebook mobile site’s nav menu, and have to be located through the search bar in the Facebook iOS and and Android apps, users aren’t reengaging with HTML5 apps either.

But Facebook has been pulling its punches. It has hundreds of millions of daily active mobile users who first see the news feed where these bookmarks are being tested. Facebook says similarly styled bookmarks on the web interface’s games canvas page have been proven to drive traffic.

The small percentage of m.facebook.com and Facebook for iPhone users in the test could click bookmark and after some confusing lag an internal browser would launch Words With Friends, The Washington Post Social Reader, CityVille Express, Warimals, or another game or app. The test may have run on the Facebook for Android app as well.

Facebook is likely testing to see if users click these bookmarks, and if their presence decreases news feed engagement or session length. If Facebook can get more eyeballs on third-party app bookmarks without degrading the user experience, it may have found a way to leverage its natural assets to begin the steep uphill battle against Apple and Google’s mobile platforms.