If you’re anything like me (and hopefully for your sake, you’re not), then you tend to do things –scheduling, booking, and so on — at the last minute. For we Last Minute Scramblers, some highly usable services have popped up that not only allow us to book at the last minute, but receive deals while doing so. Here’s to rewarding bad behavior. You may be familiar with HotelTonight, for example, an app for Android and iOS that takes last-minute deals (discounts up to 70 percent) offered by hotels on their unsold rooms — and serves them to you via your smartphone.

Well, another San Francisco-based startup thinks that there’s more to this whole last minute booking thing. Yes, from 500 Startups’ summer batch comes a new app, called WillCall, which wants to be the HotelTonight for … live events. (WillCall was one of Alexia’s seven favorite startups at 500 Startups Demo Day, which you can check out here.)

Debuting today on the App Store and on the Web for Android and Windows Phone 7 users, WillCall’s free apps offer users a short list of high quality shows each and every night of the week. The startup partners with promoters and venues to curate this list, enabling its users to purchase tickets directly from its app.

A la Uber, WillCall is starting with San Francisco before it rolls out it service in other cities, but roll out its service domestically it will, as the team plans to be in Los Angeles and New York City shortly after SXSW (in March). So, to begin with, it really is a short list of events in San Francisco for which WillCall will be offering last-minute tickets, mostly for smaller venues and independent artists.

But WillCall doesn’t just want to be for concerts, says founder Donnie Dinch, as the team plans to offer last-minute deals on musicals, symphonies, standup comedy, ballet, theater and art events, and more. There is a bar, a standard to be set, though, so you won’t find discounts on my clarinet recitals. However, at the start, events will mostly be theater and concert-focused. 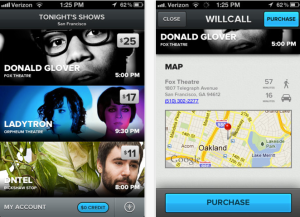 As to the discounts, Dinch says that WillCall wants to be as transparent as possible with users, and sell tickets for what they’re worth. When tickets are $20 a show, the barrier to sales isn’t so much price as it is being able to find tickets at the last minute. However, for symphonies, and plays, for example, where the price of admission is much higher, discounts come in handy, and that’s where WillCall will be focusing the majority of its discounts.

The average discount will be 30 to 50 percent off, the founder told us, which is great not only for last-minute concert-goers looking for a deal, but for the venues as well. Inventory surplus can be a big problem for hotels as well as ticketed events; in terms of the latter, the merchandise is perishable, as tickets that go unsold for a concert equals can’t be offloaded a week later. For venues that still have a lump of tickets left for an upcoming event, handing them out via WillCall just makes sense.

As a free app, WillCall plans to monetize by entering into a rev share with venues on the tickets sold, taking what basically amounts to a 50/50 cut of proceeds.

WillCall also wants to capitalize on the social nature of event-going, offering its users the opportunity to receive push notifications when a friend buys a ticket to an event. So, essentially, the app informs you when a friend in the same metro area purchases a ticket to an upcoming event, and offers you the chance to get in on the fun.

As WillCall rolls out across the country, it’s going to be a great last minute option for busy, workin-type folks, procrastinators, and more to snatch up those day-of tickets and get out on the town.

For more, check out WillCall at home here, or watch the video below: