AOL reported better than expected fourth quarter earnings this morning. The company, which owns TechCrunch, reported revenue of $576.8 million, which is down 3 percent from Q4 2010 revenue of $596 million. Earnings came in at $0.23 per share, or $22.8 million, which is down 66 percent from $66.2 million a year ago. Analysts expected $0.16 per share.

“AOL took a large step forward in Q4 and I am very pleased with the way we ended the year,” said AOL’s CEO Tim Armstrong. “Our Q4 results highlight AOL’s ability to methodically improve our consumer offering and financial performance. We continue to invest in AOL and will continue to improve our operations during 2012.”

The company says that traffic was flat from Q3 2011 as “growth in the Huffington Post Media Group sites offset declines at MapQuest and AIM.” 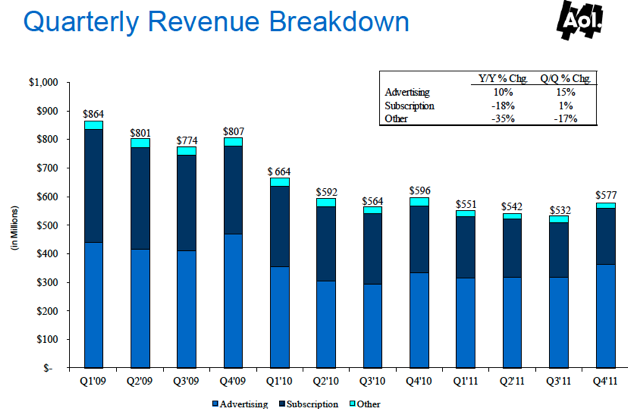