Electric car drivers deserve to see their positive impact on the environment and their wallets, but the official mobile apps for the Nissan LEAF and Chevy Volt only display remaining battery. GreenCharge is a new iOS app released today that displays your car’s remaining charge, but also its current range, the local energy price, a log of its usage, and your cost and carbon reduction versus driving a gasoline vehicle. Finally, an app that shows how you’re saving both kinds of green.

The app was developed by Xatori Inc, creators of PlugShare, the largest electric vehicle charging network in the United States. It’s the second product from the Palo Alto-based company, fueled by $400,000 in seed funding and three full-time employees. CEO Forrest North engineered for Tesla and was the CEO of electric vehicle component company Mission Motors. CTO Armen Petrosian developed anodes for Amprius and was on the Stanford Solar Car Team. 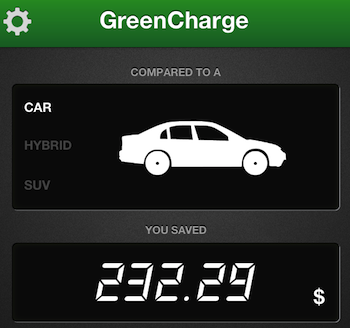 Just like the official LEAF and Volt apps, the $9.99 GreenCharge wirelessly connects to your car via cell signals know as telematics. Once authorized, GreenCharge continuously records your EV’s usage creating a logbook of your total, peak, and average energy expenditure. GreenCharge ties this to local energy costs, providing the most accurate way to determine the cost of driving a electric car.

The app also gives you plenty to feel good about. You’ll see your monetary savings and the pounds of carbon offset by not driving a gas guzzler. You can put some friendly pressure on others to consider electric vehicles by sharing how much money you saved to Facebook, Twitter, or email.

Since Xatori’s PlugShare app is already free, it might make sense to add its functionality within a tab of GreenCharge for easy access. The ability to share other stats beyond money saved would useful too. An Android version of GreenCharge on the way.

A vague sense of helping the environment isn’t enough. EV sales won’t surge until their financial benefits become common knowledge.  By educating drivers and their social networks, GreenCharge could get the mainstream to plug in.