We measure every last click when it comes to the Web, but there remains a gulf between online and the real world. Yet the online world increasingly drives behavior offline, especially when it comes to purchasing habits. How many times have you researched something online or on your mobile phone before buying it? Yet when you go to a store to buy it, everything you did online might as well disappear as far as the merchant is concerned.

It doesn’t have to be that way. The last mile in local commerce is really only the last few inches between the credit card in your outstretched hand and the card swipe at the register. That terminal is the gateway to the payment network, which today isn’t really connected to the Internet for most practical purposes. The payment networks is archaic and operates based on its own closed standards. But what if it was as easy to connect to the payment network as it is to develop an application on the Web?

That is the question a group of former Netscape engineers and executives are trying to answer with a new startup called CardSpring launching in private beta today. Cardspring is creating an application platform that will allow Web and mobile developers to write applications for credit cards and other types of payments. Cardspring attaches itself to the payment network in a secure fashion on one side, and on the other it presents itself as a platform for developers to create payment apps via Web-standard APIs. It is a bridge between the two networks.

These applications could include things like electronic coupons, loyalty cards, virtual currencies, or yet-to-be-imagined commerce apps. For example, you could get a $10 off coupon online, enter your credit card number, and then when you go to a store and pay with that card, the payment network would recognize the card and give you the $10 credit. Or you could swipe your card and it could email you the receipt. Or it could check in for you. Swiping the card would trigger an application. What you see is a piece of plastic. What the network sees is an application.

If this sounds a little bit like what Groupon, LivingSocial, Foursquare, Square or Google are trying to do, it is because they’ve all been trying to crack this nut in different ways. They all want to close the redemption loop between digital offers and in-store payments. “Groupon threaded the needle with coupons,” says CEO Eckart Walther, but in his eyes daily deals are no more than a “wonderful one-off solution—We are literally inside the payment network.”

Walther once ran Netscape’s platform group. He later went to TellMe Networks, Yahoo search, LiveOps, and ended up as an EIR at Accel. The company’s CTO is Jeff Winner, who was the head crypto guy at Netscape. He is helped come up with SSL (the standard security layer in the browser), among other things. Cardspring already raised $10 million from Accel and Greylock in a Series A (Andrew Braccia from Accel and James Slavet from Greylock are the partners on the deal). Other investors include SV Angel (which is a big believer in the Online2Offline trend), Morado Ventures, Felicis Ventures, and Maynard Webb’s investment vehicle, WIN.

Groupon isn’t the only attempt at a one-off solution. Foursquare links its merchant specials to American Express card purchases, but not every card. Google Wallet is trying to put payment apps into your phone.  It’s too fragmented. “Every day, a mini-platform is trying to launch.” he says. Instead, CardSpring is attacking the problem just like you’d expect a bunch of Netscape engineers would: at the network level. “What if we could bring the browser platform to the payment network?’ asks Walther.

Try to wrap your brain around that for a second. Your plastic credit card can trigger different applications—coupons, loyalty rewards, reminders, check-ins, you name it. All of it is secure and based on permissions you allowed each application to have (in return for some benefit). “One of the Internet’s fundamental challenges is its inability to effectively capture the economic value it creates for business in the physical world,” notes Braccia. “CardSpring’s platform enables offline stores to easily measure the impact of the web on their business.”

There is a huge need for this type of payments platform. Groupon could use it to finally track redemptions of its coupons without having to ship iPads with special software to bars and restaurants. Foursquare could tie it into its specials and actually capture the purchase data and then show that to merchants in their dashboards. So could LivingSocial.

And that’s just for starters. Imagine cost-per-action ads where the action is an in-store purchase. The possibilities are endless. Not only that, but any website or mobile app that takes credit card information will now have the opportunity to append data to those purchases, and to read and write data to the payment network. It is not just about moving money, but moving payment-related data. In the end, the data may turn out to be more valuable.

The difficult part will be to convince consumers to hand over their credit card numbers in order for these applications to work. To the extent that the initial websites and apps already hold consumers’ credit card information, like Groupon or LivingSocial do, that shouldn’t be an issue. But when unknown sites or businesses start asking for that information, it might not be as forthcoming.

Still, there is a lot of low-hanging fruit here and Cardspring brings a clever approach to a difficult problem. It is not asking much of consumers or merchants. They do not need any new technology or fancy NFC-powered phones or terminals. All they need is their credit card. The network will do the rest. 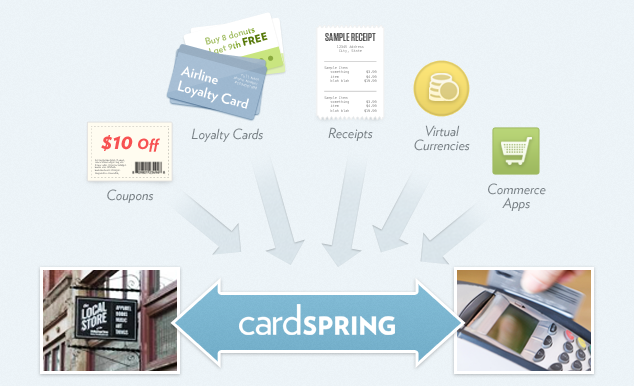