The top executives in today’s largest corporations not only travel in style, but they have access to an absurd array of perks while they travel, from awards and complimentary products to discounts on just about everything. On the IPO “road show” for his company VarsityBooks (now part of eFollet.com), serial entrepreneur Eric Kuhn remembers being “amazed” by witnessing firsthand “the rates and privileges that top executives at the underwriting investment banks received.”

After leading VarsityBooks to be twice-listed as a public company on NASDAQ (the only company I’m aware of to do so), Kuhn got out in 2006 and started FoundersCard in 2009 — determined to bring the same rewards and opportunities to entrepreneurs and founders — “the true risk-takers and value-creators,” he says.

Kuhn wanted to create a dedicated community for entrepreneurs, which would provide them with the kind of exclusive rates, elite programs, and networking opportunities that are traditionally reserved for top executives at public companies. Capitalizing on the success of I’m-more-exclusive-than-you programs like American Express’ Centurion Card, also known as “the black card,” Kuhn made FoundersCard into an invite-only membership community for entrepreneurs and founders known for its eponymous card shown above.

FoundersCard is now entering its second year in existence and today has over 5,000 members, who, for an annual fee of about $495, receive discounts and deals from a whole mess of businesses, like 10 percent off of everything at AT&T, 10 percent off Groundlink cabs, instant “Silver access” on Virgin Atlantic (and the ability to fast-track to “Gold” after buying two first class tickets), 50 percent off domains at Hover, and a free account at Shoprunner — to name a few. In total, the startup has about 96 companies offering its members benefits, including 44 lifestyle companies, 16 travel companies, and 36 business companies.

But not wanting to stink of too much exclusiveness, FoundersCard has set up its admissions so that any entrepreneur is welcome to apply. Of course, what good is that if you don’t feel like you’re part of a club? The company says it is careful to admit “only those that it thinks will benefit from its offers and actually get something useful out of them” in busy, high travel-rate lifestyles. Meaning that FoundersCard currently accepts about 70 percent of its applicants. It’s actually a tough balance to strike, and so far they seem to be doing it fairly well.

As to how its membership breaks down, FoundersCard has given TechCrunch its own “exclusive” look at its cross-section: Today, aggregate, 55 percent of their members are in technology, 16 percent in entertainment, 6 percent in fashion, 9 percent in finance, with the rest falling into that pesky “Other” category.

Next up in 2012 for FoundersCard? Turning what domestic traction its been able to gain into an international business. This year, the startup plans to begin catering to more businesses around the world, and is specifically looking to expand its hotel network (which now includes approximately 111), as it will be adding 50+ new properties (like Four Seasons, Viceroy W Hotels, Mandarin Oriental, Kimpton, and Park Hyatt) in over 20 new locations, including Anguilla, Berlin, Istanbul, Munich, Melbourne, Prague, Vienna, Zurich, and more. In fact, on Friday, FoundersCard launched a deal with Cosmopolitan Vegas.

Because FoundersCard monetizes based on membership fees, it doesn’t charge commission or take lead generation cuts from the discounts and deals it offers on hotels, which allows it to offer better ongoing rates and upgrades (and flexible cancellation policies) than most.

Now, if you’re like me, some of these fancy deals won’t exactly apply to you, as I don’t find myself jetting to Dubai on business as frequently as I’d like. But, 15 percent off TaskRabbit and 20 percent off Zipcar, for example, and perks on Virgin flights and credit from GiltCity? You can see why, especially when the membership rates drop to $295 when you are recommended to FoundersCard by a current member, these fees quickly pay themselves off. Plus, you get to feel like you’re an exclusive member of a hip, young entrepreneurs club — and that right there is priceless. Or just a reason for geeks to feel special, the jury’s still out.

Alex Payne, the guy formerly responsible for developing the Twitter API and current Co-founder and CTO of Simple told us he was into it from the get-go: “I’ve needed to do a ton of travelling for work and family over the last 18 months, and the discounts on hotels and airfare have really helped make that less painful. FC does a great job curating the discounts they offer; if I’m travelling to an unfamiliar city, I know I can rely on the hotel options to be pretty high-quality.”

Micah Baldwin Co-founder and CEO of Graphicly, too, is a fan: “I’ve been a member of FoundersCard since it first launch … and it’s been amazing in helping us at Graphicly keep costs low while growing our business. I spent almost 200 days on the road in the first year of Graphicly, and it was amazing to have a benefit like this with me,” he said.

Some others, who wished to remain anonymous said that, while they weren’t sure that FoundersCard was worth the price of admission for tiny companies not raking in the revenue, they did throw some good parties. Networking events with other founders of the same brood are always good for business, even if you’re not in the air for 200 days a year. And maybe that’s a lesson for Groupon: Even if you can’t make them loyal with discounts and deals, there’s always the opportunity to just throw a good party. 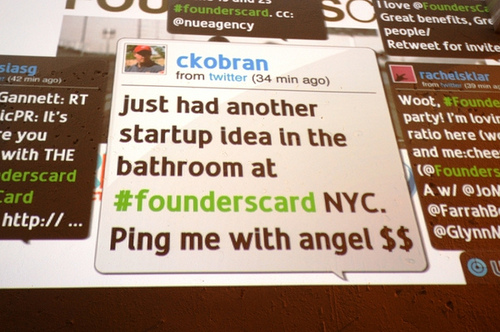 FoundersCard has been growing steadily, but it’s looking to up its services big time in 2012. It’s something worth checking out, especially as they’ve been making a big effort to begin supporting and catering to their international members — and will continue with big international expansion in the coming year. Even if an entrepreneur’s club sounds unappealing to you, it’s not hard to understand the draw. Early adopters always want access to the private beta, and for people who are already taking years off their lives just by being entrepreneurs, why shouldn’t they get an extra bag of peanuts on their flight to Bangalore?

For TechCrunch readers interested in applying, head over to founderscard.com/membership and use the referral code “FCRUNCH12”, where you will be eligible for lifetime guaranteed annual rate of $295 (40 percent discount off standard $495 rate). But remember: Mo money, mo problems.