Google is opening up its social networking service Google+ to teens as of today, according to a post from Google’s VP, Product Management, Bradley Horowitz. The move puts the network in closer competition with Facebook, which also requires that individuals be at least 13 year old before creating an account.

Says Horowitz, everyone who’s old enough for a Google account (13+ in most countries), can now create a Google+ account too.

The announcement was made alongside news of a few new safety enhancements to the service specifically for teens, including those that focus on sharing content, hangouts (video chat) and notifications.

One of these is a message that appears when a teen tries to share outside of their circle of friends. The message reads: “When you share publicly, people you haven’t added to your circles will be able to view your post and may be able to comment.”

This seems a little obvious, but given Facebook’s ever-shifting levels of post visibility, it can’t hurt to bang people over the head with the definition of “public.”

Google will also place limits on its video chatting feature called Google+ Hangouts when used by teens. If a stranger (someone outside the teens’ circle) joins a hangout, Google will temporarily remove the teen from the hangout by muting the mic and video feed. It’s interesting that it wouldn’t just remove the stranger, or perhaps remove strangers ability to even join hangouts in progress, when posted by teens. But I suppose this move is targeted towards those teens who inadvertently (or naively) make their hangout public instead of private, which could invite in an unwanted element. 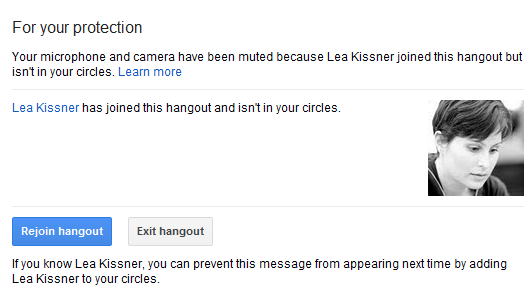 Notifications are also being restricted, so that only those in teens’ circles can contact them via IM, and blocking is easily accessible. This feature is not all that different than how chat operates by default for adults, to be fair. Any Google+ user can configure which circles are chat-enabled, for example.

It should be noted that not all countries have the same age restrictions. In Spain and South Korea, the age limit is 14 and up, while in the Netherlands, it’s 16 and up.

Google recently announced that it has now reached 90 million users worldwide. By opening up to teens, it clearly hopes to quickly grow once more. However, we have to point out that, unlike Facebook’s growth back in the day, Google+’s growth is more manufactured than organic. The company has carefully timed its feature releases and integrations with other Google services to provide ongoing boosts to user count numbers which it can then, in turn, proclaim to be “growth.” But in some cases, Google is forcing Google+ upon users – e.g., when a user creates a Google account, they’re given a Plus account, too. No doubt a few weeks after the teen surge, we’ll hear more about how much Google has “grown” yet again.

In case you’re wondering, Twitter used to require its users to be 13 and up, too. The current Terms of Service make no mention of an age requirement.