Warby Parker — the New York-based startup that sells prescription, designer glasses for a relatively modest $95 a pop — has just released its annual year in review, outlining some key stats and factoids from the past twelve months. My favorite section: most popular misspellings people search for when they’re trying to find the site, with the leaders including “Worvey Parkers” and “Warmby Parker” (Warmby? Really?).

Oh, and there’s some more serious stuff too.

It’s been a big year for the company, which has seen traffic and orders soar (your intrepid reporter is actually wearing a pair as he types this). The YIR is worth browsing in its entirety, in part because it’s interactive — a bevy of graphs and stats slide in as your scroll across the page, with key milestones and nifty artwork running across the bottom. 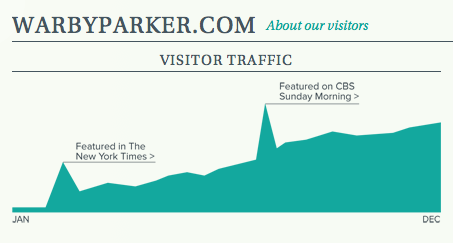 The site has plenty of interesting data, like Warby’s success with various social networks (Facebook is by far the biggest social media referrer, besting Twitter by a 3-to-1 margin). But while it includes such amusing minutiae as the average employee’s pupillary distance (59 mm), there are a few things it doesn’t include — like absolute numbers on its traffic or sales growth (plenty of companies opt to keep this information secret, so this isn’t really surprising). In any case, the graphs make it clear that things the company is growing quickly.

And there’s one stat that’s impressive for another reason: Warby Parker distributed over 100,000 pairs of glasses to people in need through its ‘Buy a Pair, Give a Pair’ program (the company donates a pair of glasses for every pair its customers purchase). 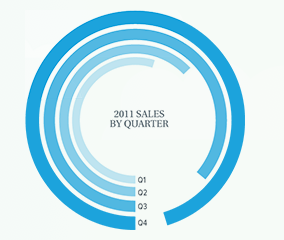