Early last summer we wrote about Backplane, a mysterious startup with impressive backers and some major star power behind it: one of its cofounders, Troy Carter, is Lady Gaga’s manager. And Lady Gaga herself has a significant stake in the company, as well as hands-on involvement with its development.

Details on the company’s product have been scant until now. But we’ve got some exclusive details — and beta codes for TechCrunch readers who will be among the first to try out the product.

First off, an updated roster of the company’s investors: Backplane is currently raising a round that includes many of technology’s top-tier VCs, including SV Angel, Google Ventures, Founder’s Fund Angel Investments, Eric Schmidt’s Tomorrow Ventures, Lerer Ventures and Menlo Ventures.

And the company says it is aggressively hiring, with a strong emphasis on attracting the Valley’s top engineers. That’s hardly unusual for Silicon Valley startups, but Backplane has significant tech cred to pique plenty of interest: Cofounder Joey Primiani is an ex-Googler and creator of Cortex. Cofounder Alex Moore was former Director of Operations (and the first employee) at Palantir Technologies, one of the most tech-heavy companies in Silicon Valley. And Joe Lonsdale, who cofounded Palantir, is the Chairman of Backplane’s Board of Directors. Rounding out the roster are former employees of Google and Facebook.

But what exactly is Backplane?

Last night I got early access to the site — or, rather, to LittleMonsters.com, the first portal that is powered by the Backplane platform. From my limited usage, the site seems to combine some of the key features of Pinterest, Tumblr, Canvas, and Ning to produce a community platform that’s both highly visual and potentially highly engaging, too.

Little Monsters is going to be a new online community for Lady Gaga and her fans, but Backplane has much bigger ambitions: it aims to help power community sites for a wide range of interest groups, covering everything from celebrities to niche topics.

After initially logging into LittleMonsters, I was presented with a grid of tiles in an arrangement reminiscent of Pinterest. Pictures of Lady Gaga made up most of these tiles, though there was a smattering of other content — including a photo of me somewhere in there (the site creates a new post whenever someone joins the site). Clicking on one of these photos would bring it up in a larger size, and, in some cases, links to an accompanying article or video. 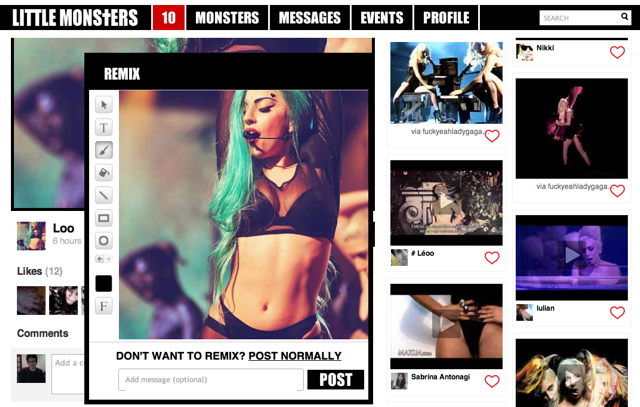 Perhaps more important than the content itself, though, is the community aspect. Users can click one of those increasingly ubiquitous heart icons to ‘Like’ a post, which makes it appear more prominently in the grid, and they can leave comments beneath each post as well. The platform is also borrowing a feature from Canvas: you can take any photo and modify it using a built-in, easy to use image editor, then share your new creation with the rest of the community.

There are plenty of more advanced features, too — the platform aims to become a calendar for your various interest groups, and supports integration with both Google Calendar and Gmail. And as more communities spring up on the Backplane platform, they’ll become more intertwined, with users able to bounce between each portal.

Given that the site was only open to a relatively small number of users when I tried it, it was hard to gauge how well this all worked together. And there are still plenty of changes to come before the site launches to the public — Backplane CEO Matt Michelsen says the site is still in an early beta, and could well see some significant tweaks before it launches in a few months (in other words, this is more of a taste of what’s to come than early access to the final product). In any case, what I’ve seen so far clearly has promise.

If you’d like to try the site out for yourself, the first 50 TechCrunch readers to send an email to info@thebackplane.com will receive Beta codes. 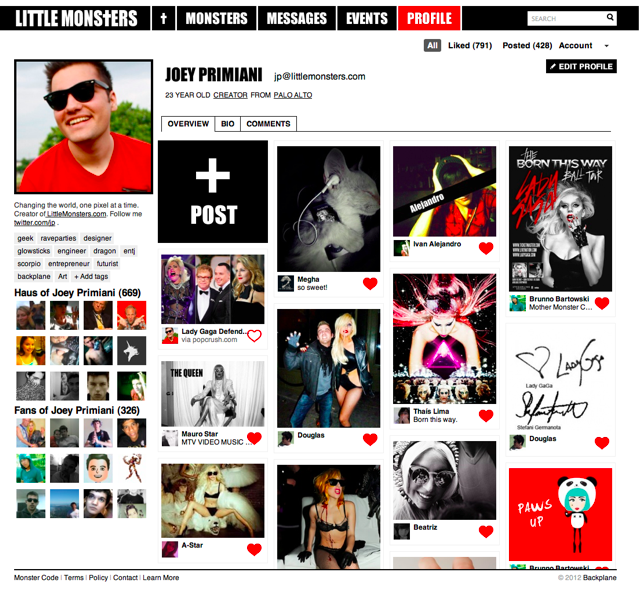