In September at f8, Facebook announced partnerships with a slew of companies who would develop Open Graph Timeline apps. Airbnb, Path, Ticketmaster, Payvment, Causes and 30 others all said they were onboard to produce apps allowing users to share when they “traveled”, “purchased” something online, “donated” to a charity, and other activity. 4 months later and many of these Open Graph applications have yet to launch, but that will change on January 18th according to our sources when a new class of Open Graph lifestyle apps is unveiled at a Facebook press event.

We’re hearing similar information to AllThingsD, which first reported this morning about the purpose of the press event. Facebook delayed the launch of the second wave of apps so it could monitor and fine tune how often they’d appear in the Ticker. Now Facebook and its partners are ready to expand the concept of sharing to encompass a much wider range of content, as shown in this video.

Many remember the first days after f8 when it seemed like you were seeing every Spotify song played by anyone you’d ever friended. Facebook wants to avoid such an onslaught tomorrow, and also make sure there are no overly spammy or misleading apps clogging Ticker. Unlike its games platform where third-party apps can be launched without pre-approval, Facebook told me in October it would be manually approving all Open Graph apps to ”make sure the initial experience with Timeline is really great”.

In late December, Facebook informed developers that it would start approving new Open Graph verbs and nouns to appear in the news feed, Ticker, and Timeline starting this month. Apps using “read an article”, “listened to a song”, and “watched a video” such as The Washington Post, Spotify, and Hulu are already in full swing, but tomorrow a new set of nouns and verbs will begin to appear. Partner apps will launch, and Facebook may also encourage more unpartnered developers to submit their apps for approval.

Here’s how they’ll work, using a charity app as an example. I could install the Open Graph app, opting in to giving it persistent permission to publish to my Timeline. Then whenever I take an action, such donating to a charity through the app, it will publish “Josh Constine donated to United Way” to my Timeline and to the home page Ticker and news feed where my friends will see it. My friends can then click though to install the app themselves, turning Open Graph apps into a big viral driver for their developers. 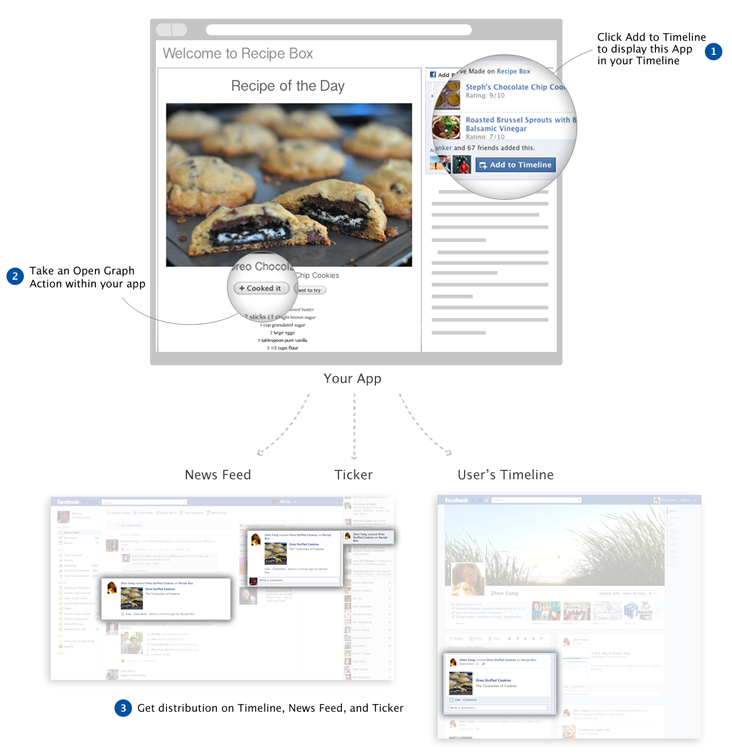 Spotify rode its Open Graph publishing to gain 3.4 million daily active users since f8, and 1 million more DAU in just its first month. It had the benefit of being one of the only Open Graph apps in the Ticker for a while, which will become much more crowded and Facebook will keep tighter control of tomorrow.

Still, some of Facebook’s lifestyle app partners stand to gain significantly. Ecommerce and ticketing apps could drive more sales, charity and crowdfunding platforms could raise more money, and sharing apps could gain users or traffic. Meanwhile, they’ll populate Timeline and the rest of the site with compelling content Facebook hopes will make it even more indispensable to people’s lives.

Facebook will also gain the ability to target users with ads according to their Open Graph activity. For example, Southwest Airlines could target anyone who said they “traveled” to Mexico. This highly accurate targeting, not just about what users Like but about what they do, could fetch a high price from advertisers and bolster confidence from investors leading up to Facebook’s IPO this summer.

Facebook’s partners are sworn to secrecy but here’s a list of some companies that could launch tomorrow by category, and the nouns and verbs you might start seeing. These aren’t all confirmed but will give you an idea of where the Open Graph platform is going:

One last potential launch tomorrow: Netflix. Its Facebook app was stalled in the US by a privacy law, but it may now be free to tell your friends what you’re watching if you opt in.