Facebook is making significantly more money per ad now, charging 23% more per 1000 impressions than at the start of 2011. There are still cheap ad clicks to be had on Facebook — you just have to keep traffic bouncing around within the social network. Facebook appears to be incentivizing advertisers to grow their Facebook applications and Pages, with cost per click campaigns that point internally costing 29% less than those linking offsite. These figures from a new study by ad agency giant TBG Digital show strong monetization performance and potential for Facebook as it prepares for an IPO this summer.

The Q4 2011 Facebook Advertising Report form TBG Digital looked at 326 billion ad impressions ran by 266 of its clients across 205 countries. The findings are statistically sound, having been vetted by the Cambridge University Psychometrics Centre.

TBG Digital CEO Simon Mansell tells me that the CPM rise indicates that “Facebook has done a good job growing the money it makes from ads”. Sponsored Stories have been a particular success. These social ads which promote the interactions of a user’s friends with brands attract up to 46% higher click through rates. This allows Facebook to earn more money while offering a lower cost per click because it doesn’t have to show an ad as many times to get a click, and can sell that real estate elsewhere. 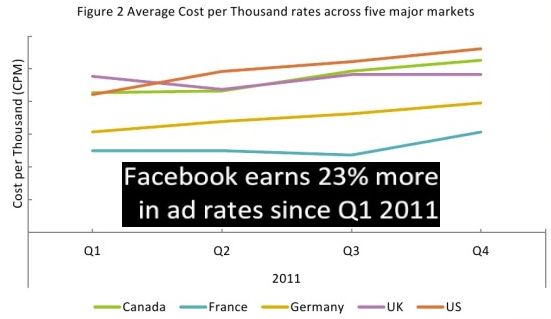 Q4 2011 was a particularly strong quarter. CPM rates increased an average of 8% from Q3 across major markets including the US, UK, Canada, France, and Germany. CPC went up 10% in the US, showing high demand from advertisers despite plateauing user growth in Facebook’s most important market. A CPC dip in the UK and France was likely due to the more recent adoption of Sponsored Stories in those countries, whereas other countries were already using them.

Worldwide, ad click through rates increased 7% in Q4 and 18% in 2011, showing that more advertisers are mastering social ad types, targeting and creative. Educating the long-tail of small and local businesses on how to use its ads products is a big focus for Facebook in 2012. The company recently struck partnerships with the U.S. Chamber of Commerce and National Federation of Independent Businesses to provide training sessions to their members.

Ads were particularly expensive this holiday season, with CPCs up a massive 55.7% in the US from November 21st and December 17th. Businesses not specifically trying to reach holiday shoppers should probably pause their campaigns during this season to avoid increased costs due to skyrocketing demand. 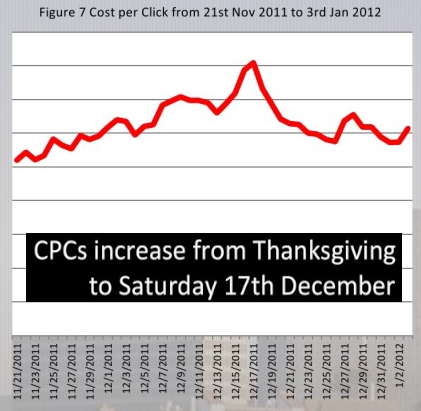 Financial institutions are navigating strict industry regulations and growing their Facebook spend. TBG clients such as HSBC and Capital One pushed the industry’s share of total Facebook ad impressions from 12% to 18% in Q4. However, these businesses often pay a lot for their ads since the primarily send traffic offsite.

To reduce their costs, financial institutions should consider driving traffic to their Facebook Pages. Internally pointed ads cost 29% less, and ads that specifically ask users to become a fan of a Page cost 45% less than those linking offsite. Why does Facebook offer this incentive? Because internally pointed ads keep users on the site where they can continue to be exposed to ads.

Mansell expects CPC and the amount Facebook earns on ads to continue to increase in 2012, despite user growth slowing as Facebook hits high penetration in 1st world markets. Eventually, CPC growth may slow if advertisers think they’re paying too much. Facebook also needs to watch out for competitors. If Twitter grows aggressively, advertisers demand could shift there.

Facebook’s goal in 2012 needs to be balancing ad rate hikes with retention big brands and small businesses spend to maintain momentum for its planned $100 billion IPO. Thankfully it will have new premium ad inventory to sell as it begins to inject Sponsored Stories ads into the news feed.