As I noted earlier this week, I’m not a fan of all of the “Company X Won CES!” jibberjabber that goes on around this time of year. It’s posturing for the sake of posturing, with the “winner” generally determined by anecdotal evidence and perceived mindshare.

If only someone could find a way to graph the show! To chart each company’s buzz (be it good or bad) over time, using cold, hard numbers to extrapolate trends from the barrage of tweets fired off during the show. Oh! Here we are..

The folks over at SimplyMeasured have pored over the 182,112 tweets that were sent with the #CES hashtag from January 9th (CES Day 0, otherwise known as “Press Day”, during which most of the big announcements happen) to January 13th (Last day of CES).

Here are some of the most interesting bits they were able to pull out: 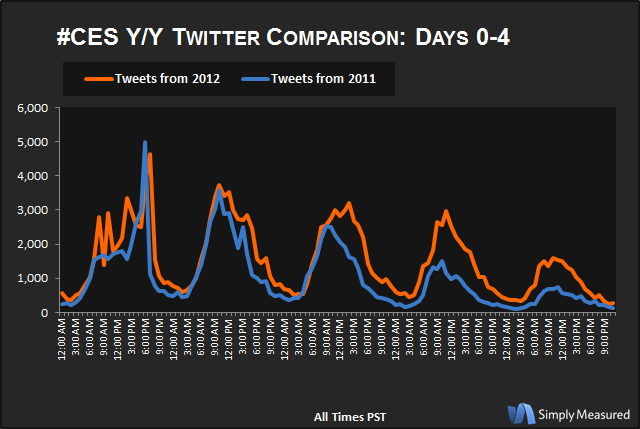 I complain that CES forces companies to cram too much into the beginning of the year, but even CES itself is clearly front-loaded. That big peak you see on the left side is “Press Day”, which actually happens a day before the convention itself starts. At least 2 companies are holding their press conferences at any given time (this year pinned Intel vs Monster, Panasonic vs. Nokia, etc), forcing editorial teams to split their staff and dilute their coverage. Meanwhile, the rest of the week goes relatively quiet and the buzz tapers by about 20% for two days in a row, balances for day, then plummets down by another 40% or so on the last day. Why not spread the love a bit? 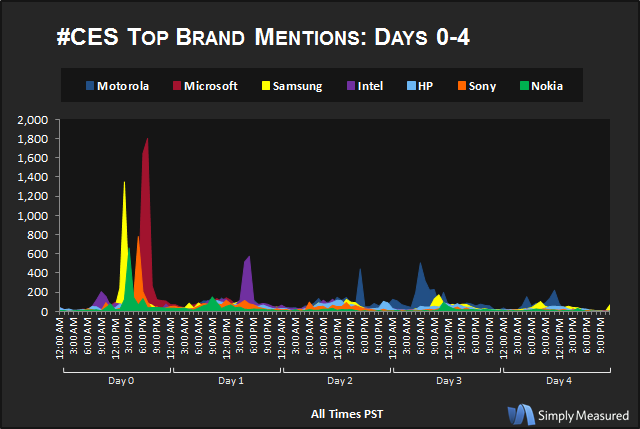 Microsoft may not have won CES, but they came pretty close to winning #CES. By buzz alone (again, “buzz” here being a simple count of tweets at any given moment), Microsoft’s press conference garnered the most attention. With that said, I’d bet that at least a third of those tweets were “What the hell? Why does Microsoft have a Tweet Choir at their press conference?”

And sneaking in with the biggest chunk of the #CES tweets by a hair was… Motorola! This may be a bit surprising given their seemingly small showing on the Brands Mention graph above, but they took it with consistency. They launched the Droid 4 and Droid RAZR MAXX on Day 0, announced a partnership with Intel on Day 2, and then lucked out with some well-received Motorola-themed giveaways that went down on Twitter on Day 3. Behind them by the slimmest of margins: Microsoft.

Meanwhile, Samsung (who almost certainly had the most actual news of the show) comes in at third. That seems wrong.

Oh, and whether or not you agree with MG that Apple won the show before it even started, you’ve gotta love that they pulled a solid 1% of tweets without even being there. That puts them in front of RIM, Verizon, Panasonic, AT&T, NVIDIA, and Qualcomm, and countless others who were actually, you know, there.