When you think about what Google, the 32,000-employee search engine conglomerate, is strategically focused on these days, here’s one thing that doesn’t come to mind: an initiative to get more Kenyan businesses online via manually grabbing data from a local startup that’s trying to do something complementary.

I’ve been looking into the well-researched story that Mocality, a Kenya-based business listing service, published this morning. There are certainly serious issues it brings up, as Google has admitted. But there’s nothing anywhere near the same magnitude as, say, the press fallout and antitrust probe around the new Google+ search integration, or the Motorola acquisition, the Android patent licensing issues, or the many other efforts and problems it has happening every day.

The gist, as Robin covered this morning, is that Mocality had its own program for gathering offline business information and posting it as a proprietary and searchable online database. The problem was that Google was taking this data (thereby breaking the startup’s usage terms), saying it was partnering with Mocality (which was not true), and offering businesses their own web addresses, sites, and web usage tips (which Mocality doesn’t do). While Google’s Getting Kenyan Businesses Online program may have been helping to bring more Kenyan businesses online through this strategy, it was benefiting from Mocality’s work without asking permission, without giving anything back  in exchange.

Oddly, as Mocality discovered, the effort was so extensive that a Google-affiliated call center in India was at one point calling Kenyan businesses, trying to say that Google was working with Mocality to do things like provide them with their own web sites. 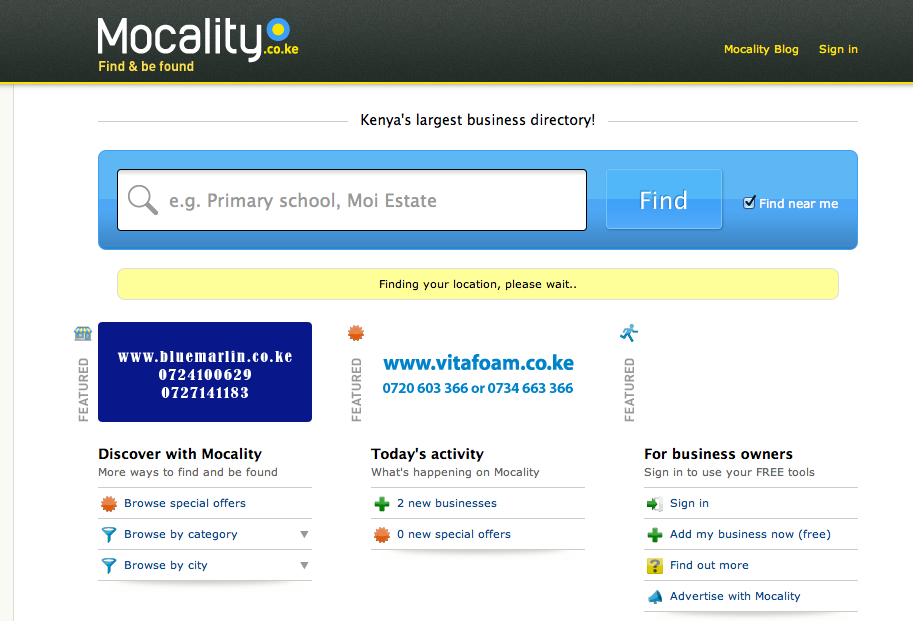 Here are some reasons I’ve pieced together for why this whole thing was most likely done by some rogue local employees and/or contractors, who did not have the permission of anyone with significant authority at Google.

– The Getting Businesses Online initiative is two years old, and highly local in the twenty-odd countries it operates in. There are organizational protocols in place to ensure local branches stay true to company-wide policies — or at least that’s my understanding after talking to a source close to the company. The problem in this case is that they were broken.

– What about the Indian call centers? Google provides them as a resource to its thousands of employees around the world, so the Kenyan operation could have simply directed people at one of its Indian call centers to make the calls. A twist here, according to the source, is that there’s no record of Mocality in the materials provided to them. That seems to have happened outside of official channels.

We were mortified to learn that a team of people working on a Google project improperly used Mocality’s data and misrepresented our relationship with Mocality to encourage customers to create new websites. We’ve already unreservedly apologised to Mocality. We’re still investigating exactly how this happened, and as soon as we have all the facts, we’ll be taking the appropriate action with the people involved.

If there’s any takeaway, it’s that Google needs to improve its management of its local getting-businesses-online projects. It is possible that Google has some big, broad, secret effort to steal information from others in order to bring more businesses online, but the evidence for that does not currently extend beyond the Mocality issue (if then). But, if you know of anything, tell me about it in the comments.

In the meantime, maybe people shouldn’t be freaking out and and acting like the entire company is complicit.

Anyway, it’s back to our regularly scheduled coverage of all of the other issues: antitrust claims, patent wars, the question of whether mobile apps or social features will displace Google’s core search business as the key way that we all find information on the web, etc. etc.