Hulu CEO Jason Kilar just posted a recap of the online content business in 2011, and revealed that Hulu’s revenue grew 60% from 2010 to approximately $420 million. While the growth is a good sign, this is less that the $500 million expected for the year.

Kilar says that Hulu Plus now has more than 1.5 million paying subscribers and is attracting more than 2 times the number of subscribers each day when compared to this time last year. Hulu continues to expect that its subscription services will account for more than half of Hulu’s overall business later this year.

In terms of content, Hulu’s content grew approximately 40% vs 2010 and Hulu Plus’ content offering grew more than 105%. Hulu Plus is the only online video subscription service that offers current season content from 5 of the 6 largest U.S. broadcast networks. As we’ve written in the past, part of the value of Hulu is in the content deals it has with its owners to stream new NBC, Fox, and ABC television series over the Internet.

Overall, He wrote that the Hulu ad business “grew aggressively” during the year, despite the declining economy and soft ad market in the last half of 2011. As a whole, Kilar is optimistic and “bullish” on the company’s 2012 growth. The company plans to invest approximately $500 million in content in 2012 (though it’s unclear where all of this money will come from).

Not mentioned in the note were the reports that Hulu was shopping itself around for an acquisition last year, and got offers from Google, Dish Networks, and Amazon. The company ended these talks in October.

For basis of comparison, Netflix did $822 million in revenue last quarter. Basically, Netflix does nearly twice as much revenue in one quarter as Hulu does in a year. 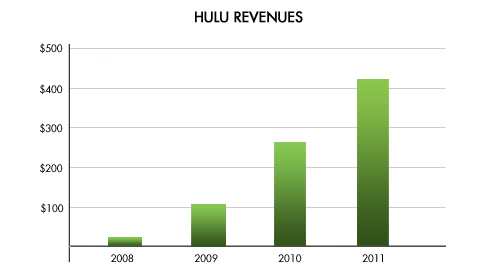