Editor’s note: Contributor Kai Lukoff is based in Beijing and is co-founder of the startup blog TechRice.

Here’s Hongyi Zhou’s advice to Chinese entrepreneurs: “Don’t try to be cool.” Zhou is CEO of Qihoo 360 (NYSE: QIHU), whose company’s core is the definition of uncool: anti-virus software. Yet Qihoo has 370 million monthly active users and a very cool $1.9 billion dollar valuation.

If you want to build a big company in China, don’t build for your iPhone-toting friends, the Chinese tech blogs, or copy the latest fad on TechCrunch. Chinese entrepreneurs must appreciate the vast chasm between white-collar elites and the rest of the country. The Silicon Valley has an echo chamber of its own, but China’s is an order of magnitude louder.

“There’s only 80 million or so white-collars in China, and not even 5 million could be considered your peers,” Zhou told a group of Chinese Stanford students visiting as part of the Stanford CEO Beijing tour over winter break. Many of the students are already running startups in China or considering returning to do so.

Hot startups that pop up on TechCrunch all have at least five Chinese versions. That’s a common route for the ‘cool kids’ among Zhongguancun’s techies: there are more Tumblr, Flipboard, Pinterest, Instagram, and WhatsApp clones and mashups than you can count. You may receive a mention on 36kr or Tech2IPO, China’s top startup blogs, but that does nothing for your user growth in a second-tier Chinese city, let alone in the third, fourth, or fifth tier.

Chinese blogger Simon Shen writes, “China does not have one so-called ‘national internet,’ instead there’s a great divide. It encompasses the elite with ThinkPad laptops and also the grassroots with MTK Shanzhai mobile phones. Our elites are on par with America, while our grassroots are on par with Vietnam.”

In “The Story of W&L”, Shen tells the tale of two Chinese entrepreneurs: W, who always adopts the latest coming out of the Silicon Valley, and L, who mingles with migrant workers to learn what simple games they want on their Shanzhai feature phones. It’s L who’s making the real money: “in China, you target elites to make noise, but you target the grassroots to make money.”

The Four With Reach
Only four companies have achieved mass market reach among China’s 500-million plus netizens: Tencent, Baidu, Alibaba, and Qihoo. The first three are China’s reigning Internet emperors. Qihoo is a scrappy newcomer with the user numbers and decent revenues, though its business model is still a work in progress. All four feature products that foreigners—and highly-educated Chinese returnees—may scorn, but are beloved by local users.

Qihoo 360 started in 2006 with anti-virus software, a product so prosaic that it even flew under the radar of China’s existing Internet giants for the first three years of the company’s existence. In 2009, Qihoo made a daring decision to give away its anti-virus software for free. Anti-virus may not be flashy, but it’s a basic essential for all Chinese netizens, who face a daily barrage of viruses and malware. It quickly became the default for Chinese Internet users.

Leveraging that trust and brand recognition, Qihoo then rolled out a suite of security-related products. In China, the Qihoo 360 Safe Browser is second only to Internet Explorer in market share. The browser directs massive traffic to a start page (hao.360.cn) full of paid links to popular Chinese websites, with a layout like Yahoo’s circa 1996. It won’t win any awards for web design, but selling links and search traffic on that one page generated 60% of Qihoo’s $47.5 million in Q3 2011 revenue (see also Red Tech Advisors’ superb deep dive on Qihoo’s innovative business model).

Building a billion dollar company and solving a real problem for hundreds of millions of users, that’s pretty cool. 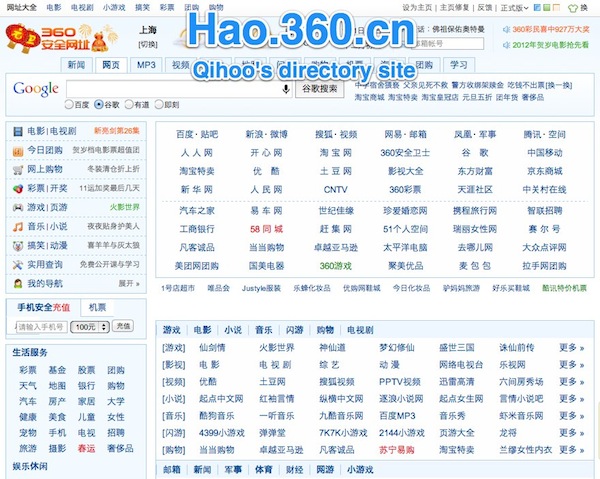