According to a report released by Thomson Reuters and the National Venture Capital Association (NVCA), thirty-eight U.S. venture capital funds raised $5.6 billion in the fourth quarter of 2011. While this is a 162 percent increase by dollar commitments, the fourth quarter also saw a 41 percent decline in terms of number of funds compared to the third quarter of 2011, which saw 64 funds raise $2.1 billion during the period.

In fact, the report shows that this quarter marks the lowest number of funds raising money since the third quarter of 2009. U.S. venture capital fundraising for all of 2011 totaled $18.17 billion from 169 funds, a 32 percent increase by dollars compared to 2010 and with the same number of funds.

The top raise for the quarter was Khosla Ventures’ new $1 billion fund (the fourth largest fund year-to-date). In terms of 2011, Bessemer Venture Partners’ $1.6 billion fund, Sequoia Capital $1.3 billion fund, and J.P. Morgan Digital Growth fund (to the tune of $1.2 billion) all led the major raises for the year. 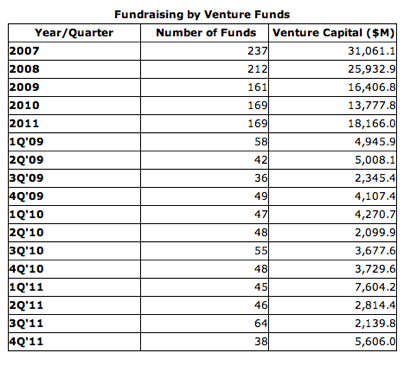 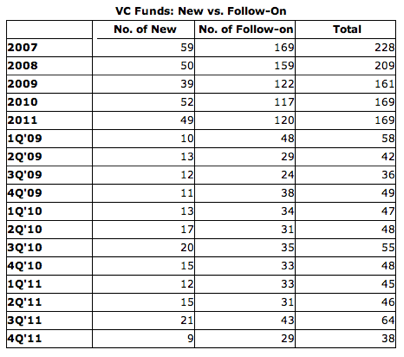