Microsoft must have feared that the annual “airing of the modest success” they bring to CES every year might not be exciting enough to satisfy the many CES attendees who were expecting something major for what may very well be their last keynote (at least for a while). So they brought out the Tweet Chorus.

What is the Tweet Chorus? It’s exactly what you think. Unless you think it’s a bunch of birds. 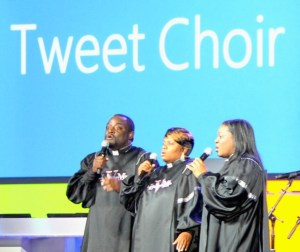 This soulful band took tweets from Microsoft’s stream (no doubt curated to remove objectionable material and excessive hashtagging) and turned it into an improvised gospel tune.

The autotuned Bill Gates video they crooned about was a great video by Pogo remixing the last 15 years of Microsoft presence at CES. It actually was pretty great, and we’ll post that soon for your pleasure and edification.

I wish they’d given the Tweet Chorus a little more free reign, though. Why not some flamewar duets, or bringing in some harmonies on @s and hashtags? I feel there is great potential here. Hopefully they do parties.