So much excitement. This is my first CES and while MG may be correct to think that some of my fellow tech bloggers find this trip a tad tedious, I’m pink with barely controlled glee just from being here. But I’ve been excited about CES for a few weeks now, ever since I went to meet with Toshiba and get a sneak peek at their latest tablet.

The Excite X10 is now the world’s thinnest 10-inch tablet, measuring in at just .3 inches thick and weighing just 1.2 lbs. But don’t forget that the iPad 3 is presumably just around the corner (along with quite a few Android slates this week), so anything can change. A brushed magnesium alloy finish graces its backside, with Corning Gorilla glass up front to prevent any scratching. It’s really a beauty.

Under the hood you’ll find a TI OMAP 4420 1.2GHz dual-core processor along with 1GB of RAM. As far as the OS goes, however, Toshiba was a bit iffy. The tablet will either ship in mid Q1 with Android 3.2 Honeycomb, or a bit later with Android 4.0 Ice Cream Sandwich. I don’t know about you, but I’d rather wait a bit longer for Ice Cream Sandwich.

The 10-inch screen boasts a resolution of 1280×800, and is built with a special direct bonding technology that allows for such a thin profile. A 2-megapixel front-facing shooter is present and accounted for if you’re into video chat, and a 5-megapixel shooter can be found on the backside of the tab. 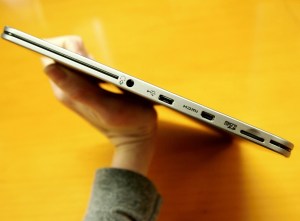 Toshiba’s all about the ports, and has been with each tablet offering it’s brought to market. With the Excite X10, you’ll have access to a micro USB, mini HDMI out, and micro SD card slot. Obviously full-sized ports are more accessible, but fitting these smaller connectivity points onto such a thin tablet is commendable nonetheless.

Toshiba is also rather good at leaving Android alone, and has thus implemented very little of its own software. That includes its own media player featuring DNLA compatibility (which has been revamped from previous versions and looks much cleaner), Toshiba’s File Manager, Netflix, and QuickOffice. Toshiba’s also added an app to let you screen grab which has been sorely missing in Android for longer than I care to think about. 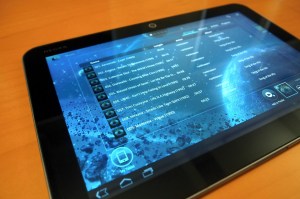 Android tablets have been quite the flop in the past year (with the exception of the Kindle Fire, sort of), but I have a good feeling about 2012 Android slates if this is the type of stuff we’re going to see.

Pricing is still unclear for this guy, but with its premium status I’d assume it’ll face off against the iPad more so than the Kindle Fire.

(Note on images: Regza is the tablet’s Asian name, and won’t appear on U.S. units)