Ultrabooks are all the rage for 2012, and we’ll probably see quite a few of them at CES next week. But there are still some of us who prefer a more robust computing experience, which is why HP has today announced the Omni 27-inch all-in-one and the Pavilion HPE h9 Phoenix, the most powerful Pavilion model to date.

I actually was lucky enough to get hands-on with these puppies a few weeks ago, and the 27-inch Omni is a sight to behold. It’s sleek, seemingly well-constructed, and speaks to the minimalist in me. The PC hosts all the ports you’d expect out of an all-in-one, including HDMI-in, Blu-Ray disc drive, two USB 3.0 ports, four USB 2.0 ports, an SD card reader, and an ethernet jack.

You’ll also find up to 2TB of internal storage under the hood, along with an Intel Core i5 2400S processor and Beats Audio. The 27-inch screen reclines and can be adjusted so that everyone’s comfortable in front of the computer. HP also included its LinkUp software, which lets you sync content between devices over the WiFi network. 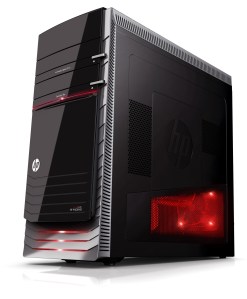 The Phoenix, on the other hand, really spices things up in the design department. It doesn’t exactly suit my tastes, but I’m glad to see HP getting a bit more aggressive in terms of design. It’s the latest in HP’s Pavilion E series, and packs an FX-8100 (8-core) processor, AMD Radeon 7670 graphics, has a 160GB SSD, and 8GB of RAM.

Connectivity is in no short supply, with memory card readers of all shapes and sizes, two USB 3.0 ports, four USB 2.0 ports, and two optical drives. Wireless mouse and keyboard are included, which is also the case for the Omni.