It was a very Android and iOS Christmas. Mobile apps research form Flurry released estimates on how many Android and iOS devices were activated on Christmas day, as well as how many apps were downloaded. On a combined basis, 6.8 million devices were activated, up 353 percent from the 1.5 million average activations a day over the first 20 days of December. And that number from 2.8 million combined activations on Christmas, 2010, the previous record.

Flurry doesn’t break out the split between iOS and Android. But you can triangulate the numbers with other publicly available stats. Android chief Andy Rubin recently noted just before Christmas that Android activations surpassed 700,000 a day. So that leaves between 700,000 and 800,000 a day for iOS devices (iPhones iPads, and iPod Touches), roughly speaking.

The big unanswered question is whether that 50/50 split continued on Christmas Day, or whether one OS or the other prevailed as the choice Christmas gadget gift. My guess is that Android was beating iOS in total daily activations up until Christmas, but the pull of Apple’s marketing might have evened things out on Christmas Day.

In terms of apps, a record 242 million total apps were downloaded across both platforms, a 125 percent jump from the daily average earlier in December. Last Christmas, the number of combined downloads was 150 million.

Flurry expects a billon apps to be downloaded between Christmas and New Year’s Day. 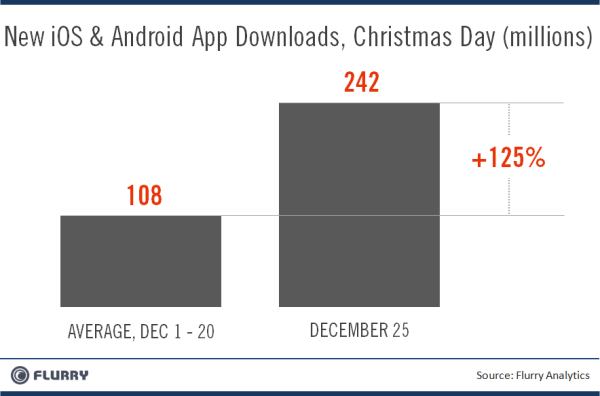