Skitch, the popular photo editing Mac app acquired by Evernote in August, is now available on the iPad. The release follows the launch of the Skitch for Android app earlier this year, and is the first iOS-compatible version available. Using the new app, you can annotate just about anything – a new photo, one from your camera roll, a screenshot, a map or you can just draw on a blank canvas.

And, of course, when you’re finished with your creation, you can save the photo to Evernote for safekeeping.

After choosing your starting point (a photo, screenshot, etc.), you can edit your creation using a number of built-in tools that take advantage of the iPad’s touchscreen interface. Objects you draw on the screen can be moved around with your finger or pulled into the trash. A pencil tool lets you draw freehand. You can add text. And you can drag, pull and adjust other objects like arrows, circles, squares and lines.

None of this is entirely ground-breaking stuff, but Skitch does what it does very well. It’s a pleasure to use.

In addition to the Evernote integration, your creations can also be tweeted or even – and this is pretty cool, too – mirrored to any Apple TV connected screen via AirPlay. It’s DIY Powerpoint with free tools. Nice.

But I know what you’re thinking: WHERE IS SKITCH FOR IPHONE ALREADY?

Evernote says its “in the works,” which is what they’ve been saying since August. According to the company blog post, they launched on iPad first because it’s “the ideal form factor for tactile annotation.” What about the nearly four-month-old Android app then?

You can grab the new iOS version of Skitch from here. 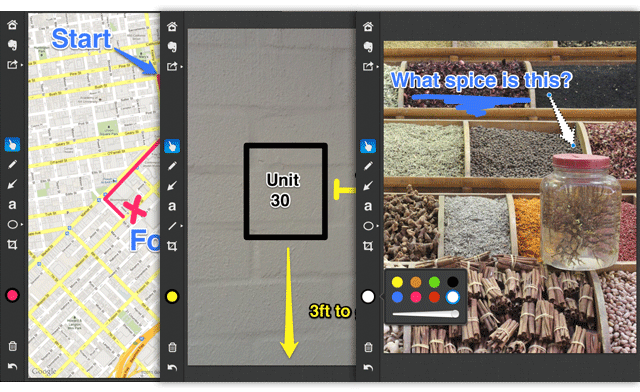