For the first time, the Facebook for Android mobile app has eclipsed the daily active user count of Facebook for iPhone. The Android app launched in September 2009 more than a year after its iPhone sister and has been playing catch-up ever since. Both are developed internally by Facebook. This week the two were briefly tied, but the Android app is now pulling away with 58.3 million DAU compared to the iPhone app’s 57.4 million, according to the AppData tracking service.

With the Android device base growing at 550,000 activations per day and Timeline now available for Android but not yet for iPhone, I expect this gap to widen. [Update: Facebook released Facebook for iPhone 4.1 that supports Timeline access on December 18th.] 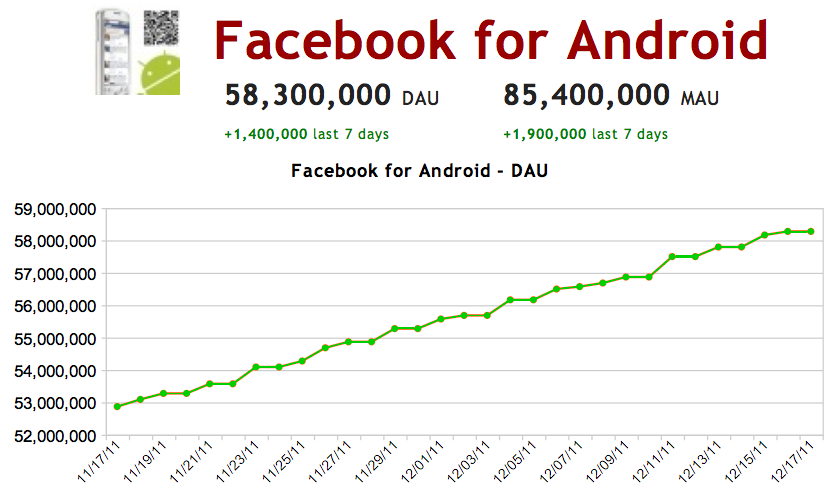 Facebook for Android‘s monthly user count of 85.4 million still lags behind the iPhone app’s 99.1 million MAU. However, this stat isn’t as important as DAU, or stickiness — the percentage of monthly active users that return daily. Android’s stickiness is 68.2%, compaed to iPhone’s 57.9%. This could indicate that Android devices appeal to a younger, more Facebook-engaged audience, or to more hardcore technology users in general. The iPhone’s role as a fashion and status symbol may be drawing less engaged users.

Another explanation for the Android app taking the lead is that Facebook released an official iPad app in October which now has 5.5 million DAU. Though many users likely switched from using the unoptimized iPhone app on their iPad, some probably came from unofficial third-party apps.

Until Facebook for iPhone is updated to support Timeline (which it was on Dec. 18th), some of the app’s users some may stray to the HTML5 mobile site and slow the app’s growth. Meanwhile, Facebook for Android 1.8.1’s ability to access Timeline can help the app grow its lead. For reference, Facebook for BlackBerry has 29.9 million DAU, and Facebook for Windows Phone has 360,000 DAU according to AppData.

User counts of the Facebook apps matter because they can influence where Facebook devotes mobile development resources. For years, features were first released for the iPhone version, possibly because its higher user count made it more of a priority. If the Android app becomes significantly more popular, Timeline might be the first of many features it gets early. [Update: This could set an example for other companies to develop for Android first as well.] And that could sway people choosing what phone to buy.

This is a coming of age moment for Android. 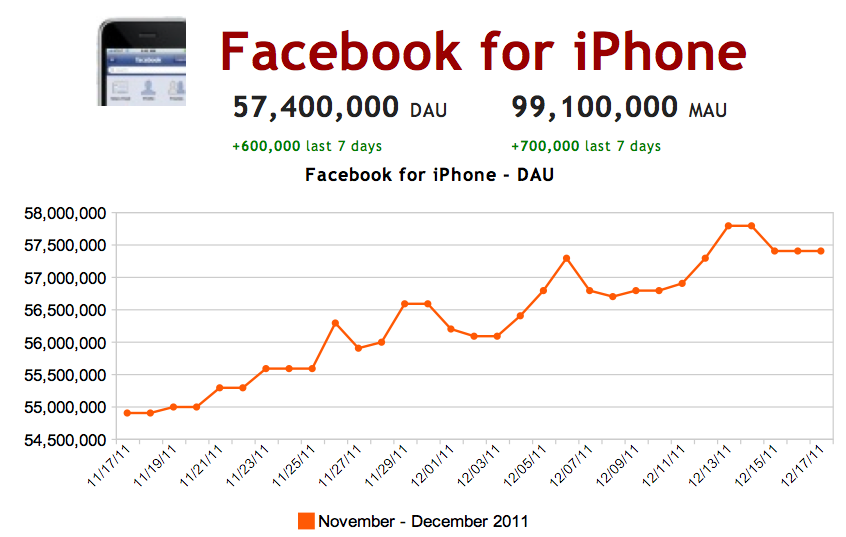