For a long time now, Spotify has had its own Radio experience, but, to be honest, it hasn’t been very good. Then, last week, the Swedish-turned-America music service announced that it was redesigning its radio experience from the ground up, offering unlimited stations and unlimited “skips”. And it’s no mistake that, during his presentation of the new Spotify Radio, CEO Daniel Ek happened to compare his app to Pandora.

Since its IPO, Pandora has been on a kick, but Spotify is doing everything it can to continue nipping at its heels and has added 7 million new users since integrating with Facebook at f8.

At the end of November, Spotify hosted its first big American event, announcing a “new direction” for the service. A big part of this is Spotify’s new platform for third party developers, who are now able to integrate Spotify’s massive collection of music into their own apps.

And today, Spotify will begin officially rolling out “Radio” to its users on top of its new app platform. But, what Spotify hasn’t been talking about until today is what kind of technology is powering its awesome redesigned Radio functionality.

Given The Echo Nest’s relationship with app developers and record labels (it recently partnered with EMI to open its catalog to app developers), this relationship makes a lot of sense. The Echo Nest will now essentially be powering Spotify Radio, allowing users to create personalized radio stations based around songs or artists in Spotify’s roster of over 15 million tracks.

Partnering with The Echo Nest allows Spotify to enable users to build playlists dynamically around any song or artist for a far deeper radio experience than Spotify has offered previously. As The Echo Nest has one of the more sophisticated playlist engines out there, combining this playlist intelligence with Spotify’s huge catalog and deep social integration should definitely give Pandora pause.

Users will be able to find Spotify Radio located within Spotify Apps, which will now be available to users of its free service as well as Unlimited and Premium Subscription users. 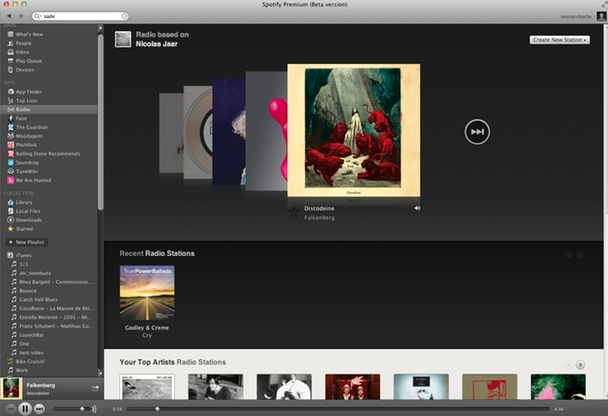