In October of 2001, Rockstar Games dropped a bomb on the gaming world. That bomb was called Grand Theft Auto III. In just one release, Rockstar shifted their flagship 2D series into a 3D world, introduced an enormous chunk of the population to the concept of massive sandbox games, and stirred up the first of many controversies that the company has since become known for.

Just over 10 years later, GTA3 is back — but now it’s mobile. As of yesterday, it’s available for iOS and Android. Same game, same grit, same campy over-the-top action… but in your pocket.

So, how has the game held up? How well did it make the jump from controller to touchscreen? Is it worth your $5?

Lets go ahead and answer those immediately: Surprisingly well, moderately okay, and probably. 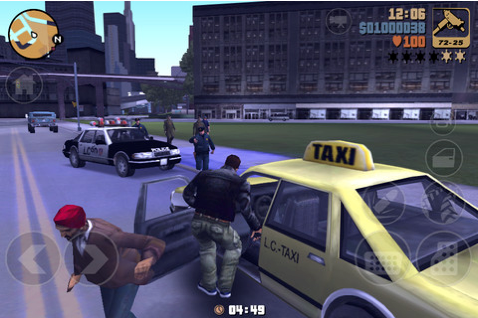 For a game that’s probably older than the TV sitting in your living room, Grand Theft Auto 3 is still remarkably entertaining. I won’t wax on too much about the gameplay itself; many hundreds of reviews did that a decade ago, and it’s still the same game (save for a few little perks ported in from modern GTA games, like instant retries on failed missions) it was then. What worked well then still works well today: you run around, explore, go on a few hundred missions, then blow up everything in sight whenever all that gets boring.

It’s not what most would call “gorgeous” by today’s gaming standards (read: it’s no Infinity Blade II), but it really does still look good. The audio is also wonderful, with an absurd amount of dialog, sound, radio chatter, and music crammed into the 500 MB package. At the very least, it’s a wonderful testament of how far technology has come; what required a big ol’ dedicated gaming console just a decade ago now runs effortlessly on an itty-bitty battery-powered slab of glass.

To say it “runs effortlessly” requires a bit of a caveat, though. Rockstar claims support for all of the more recent iOS devices, including the iPhone 4, iPad 1, iPhone 4S, and iPad 2. On the latter two, it’s butter. On the iPad 1, graphic quality takes a massive hit (see the comparison shot above) — and still, framerate issues tend to rear their head. (Alas, I don’t have an iPhone 4 handy to test it on, so I can’t comment on the compatibility there.) 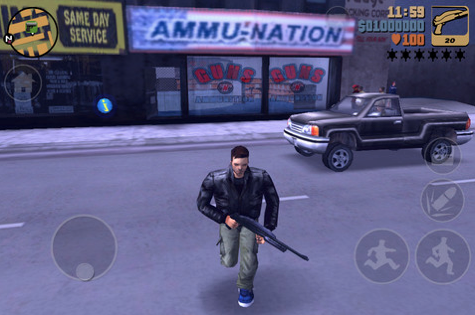 Look up at the screen shot above. The buttons! They’re everywhere! You can feel your hands cramping already.

It’s actually quite playable — in most cases, at least. The D-pad drops wherever you put your thumb when you’re hoofin’ it, and the other buttons are big enough that they’re not too much trouble to find (Oh: and if you think you could layout a better control scheme, you can re-arrange/re-size them in the settings screen.) Driving isn’t too bad either (though, man is it easy to flip your car now. I don’t know if they tweaked the physics engine or something, but it’s far easier to find yourself upside down and covered in flames than I remember.)

Shooting, however, is a rather terrible experience… which is unfortunate, considering how crucial it is to the game as a whole. The game has an autolock system which, even after fair amount of playtime, never seems to work the way I expect. It’s not so bad as to make the game impossible (just quite frustrating at times) but is detrimental enough that it influences my recommendation.

As for said recommendation: if you’ve never played through GTA3, I wouldn’t suggest having the mobile experience be your first. The controls, while acceptable, just take away too much of the magic. GTA3 is a great game and was far ahead of its time; if it’s going to be played by a newcomer, it deserves to be played as originally intended. If you played through the original (or started it, and never got a chance to finish before Mom slung the PS2 at a garage sale) and are just looking to swim in nostalgia, however, it’s easily worth the 5 bucks.

You can find GTA3: 10th Anniversary in the App Store here