Ness Computing has just launched a new version of its restaurant search engine app that takes its existing recommendations technology and adds in new sharing services. Yes, there are plenty of restaurant recommendations apps out there, and social tie-ins are increasingly common on mobile devices. But what Ness does is already special, and getting better with the new version.

The company has spent years developing machine learning technology that looks at your social data from sites like Facebook, Foursquare and Twitter, as well as your behavior, and figures out which nearby restaurants you’ll like most. 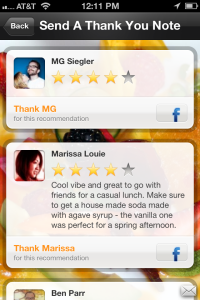 It presents this data in a score from 0% to 100% match in a classy scrolling interface. Instead of going to a site like Yelp and seeing every restaurant with 3.5 to 4.5 stars, as cofounder and chief executive Corey Reese tells me, you get an exact percentage based on its analysis, along with explicit ratings from your friends to highlight what matters. (Note that it has bigger plans for applying this tech, as we’ve covered, but it’s focused on restaurants for starters).

Having launched in late August, it has spent the intervening months refining its system using the 1.5 million ratings generated by the 100,000 users it has accumulated. The result is even finer-grained recommendations. The new social features should help it get out in front of more users.

The core additions include a way to post thank-you notes and reviews to Facebook. Just click on the photo of your friend in their review to send the note, or write a review and share it on your wall and news feed. The homescreen also now shows mouthwatering photos of dishes from various cuisines, based on what it thinks you like most (you can swipe to pick different ones). The app has upgraded its provides friend recommendations and notifications integrations with iOS5, too.

The getting-started process for new users has also been rearranged from the previous version to highlight sharing. In a series of three steps, you connect with Facebook or Foursquare (Twitter is coming later), and it starts pulling information about you and your friends from those platforms. The second step asks you to provide ten ratings of various nearby locations — as with the previous version, this helps it build on your social data. Then it asks you to invite friends.

Overall, Ness’s tech effort has resulted in much better results for users, and the interface makes the experience more enjoyable. But it’s still hitting a crowded market that has established competitors like Yelp and Urbanspoon. The one-off recommendation improvements that it can provide are often subtle, so integrating social features could help it break out.

The new version is now live in the iTunes App Store (here).