We’ve been tracking Socialcam‘s foray into mobile video sharing since the app launched in March, so we have some context for the announcement today that it’s passed 3 million downloads. Basically, the app is starting to take off.

The app is coming off its biggest download weekend to date, “primed” by a big download weekend over Thanksgiving, he says. It had introduced a feature to let users share videos privately a couple weeks ago, which hit the holiday right — the two biggest use cases it’s seeing are special events and families. 25% of all videos are now private, with both long-time and new users taking advantage of the feature on top of the social focus. 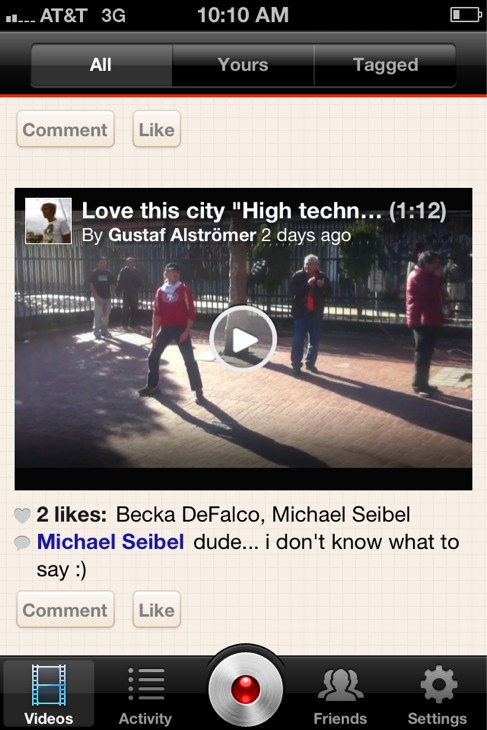 The big results this past weekend, though, were more about doing what many of us did, which was go back to our normal lives and hang out with friends.

The company’s been getting more and more pick-up for its Instagram style “filters,” too, which is also likely driving more usage and downloads. After adding filters in October, the company said 45% of users’ videos had them. Seibel tells me that 72% of videos taken have them now.

More subtly, the company is also getting enough users that it’s able to show people more relevant content from friends when they first join. The median number of videos seen by new users has been steadily climbing, and is now at 7. It figures out who your friends are and what to show you by letting you sync with Facebook, Twitter and your address book.

While the app is available for both iPhone (here) and Android (here), Seibel says that the vast majority of users are on the former device. The issue is what many mobile developers face — it’s hard to support all the Android versions and devices out there.

The company hasn’t turned on any revenue model yet. One option is freemium, with paying users getting extra features. But Seibel’s more interested in eventually getting into advertising, mixing in relevant video content with what its users are creating in a non-invasive way. But all that’s further out. Growth is the focus for now, and based on the data available, expect more of it soon.

The Justin.tv spinout is going head-to-head with other serious startups like Klip, and seems to be taking an early lead as this space evolves.