Toronto-based deal provider Dealfind, which recently became one of the first half-dozen or so partners to be featured within Google Offers, is now available as its own standalone mobile application. The new app works on both iPhone and Android, allowing deal hunters to locate, purchase and store offers on their mobile phone.

There’s nothing all that remarkable about the app itself – you pick your city, find a deal you like and tap “Buy.” The app will also keep a record of your vouchers, whether new, used, pending or “gifted” (that is, given to someone else). My one quibble with the app’s user interface is that, upon first launch, it didn’t show all the supported cities in the main list until you selected your country – it defaulted to Canada. But instead of walking you through the sign-up process by asking for access to your location or having you type your city’s name in a form, you had to hit the “country” button to access the U.S. list. It’s a minor complaint, but there you go. 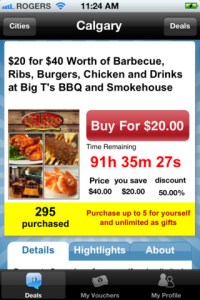 Dealfind was founded in 2009, and is now operating in 70 markets across the U.S. and Canada. In the past, the company has been referred to as the “Canadian Groupon,” or “Canada’s Groupon,” but that label no longer seems accurate. In November, Dealfind added 18 more U.S. markets to its lineup, bringing the total to 41 U.S. cities versus the 28 it had in Canada. Seems more like a “North American” Groupon now, eh?

Perhaps. But not all the supported markets have the same quality of deals. For example, in the far-off-land known as Tampa, Florida, today’s deal was on a toy shark from an online toy store. Yawn. Your mileage may vary, of course.

The company says that it has sold 1.6 million vouchers totaling $390 million since launch and sees website traffic between 12 and 16 million visitors per month. Which just goes to show, if you call it a deal, some people will buy almost anything. Even a toy shark. In general, however, the service is focused on local deals, like restaurants, spas and salons.

Dealfind says it will add travel, national, everyday deals and other verticals to the service by the end of the year.