comScore just released its monthly U.S. mobile data report, which took a look at trends and activity during the three month average period ending October 2011. While Google Android continued to gain ground in the smartphone market (with 46.3 percent market share); Apple’s OEM share gained during this period (perhaps with the introduction of the iPhone 4S and Sprint as a carrier in the market), with one in ten mobile subscribers now using an iPhone.

According to comScore, 90 million people in the U.S. owned smartphones during the three months ending in October, which is up 10 percent from the preceding three month period. And during the time period, 234 million Americans age 13 and older used mobile devices.

In terms of OEMs, Samsung to be the top handset manufacturer overall with 25.5 percent market share, followed by LG with 20.6 percent share and Motorola with 13.6 percent share. Apple took the fourth spit with 10.8 percent share of mobile subscribers (up 1.3 percentage points), while RIM rounded out the top five with 6.6 percent share.

With respect to operating system, Google’s Android OS continued to dominate with a nearly 50 percent market share, up 4.4 percentage points from the prior three-month period. Apple OS share only grew 1 percentage point to 28.1 percent of the smartphone market. And RIM ranked third with 17.2 percent share, followed by Microsoft (5.4 percent) and Symbian (1.6 percent). 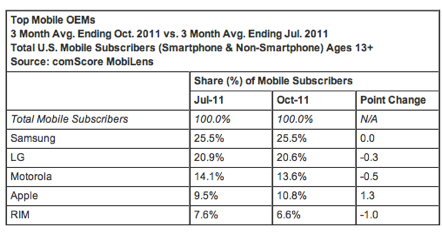 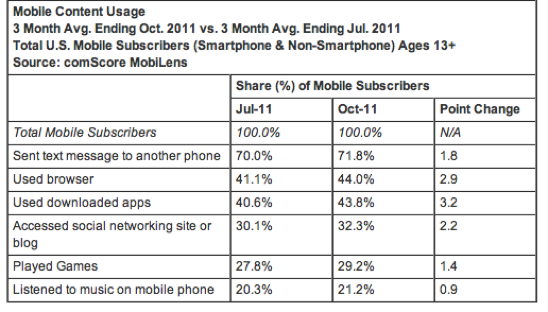