Retailing giant Walmart is launching its first-ever social gifting platform tonight, dubbed “Shopycat.” The service, previously in beta, is initially available as a Facebook application where it will also be promoted to the nearly 11 million Facebook users who have “liked” Walmart’s fan page. The app, which suggests gifts for friends based on their Facebook use, was built with technology Walmart acquired from social media startup Kosmix (now @WalmartLabs) earlier this year.

And here’s the interesting part: the new app won’t just point you to pages on Walmart.com for its gift recommendations. It also recommends products from nearly two dozen other retailers, including Barnes & Noble, ThinkGeek, RedEnvelope, NBC Universal, Hot Topic and more. (Just not, of course, Amazon).

The technology behind Walmart’s gift recommendations grew out of Kosmix’s Social Genome, a semantic technology platform that was originally used to power social media discovery services built primarily on top of Twitter. Now that Kosmix’s platform is a part of Walmart, those same algorithms are used to analyze people’s interests based on their Facebook posts, profile updates and “likes.” 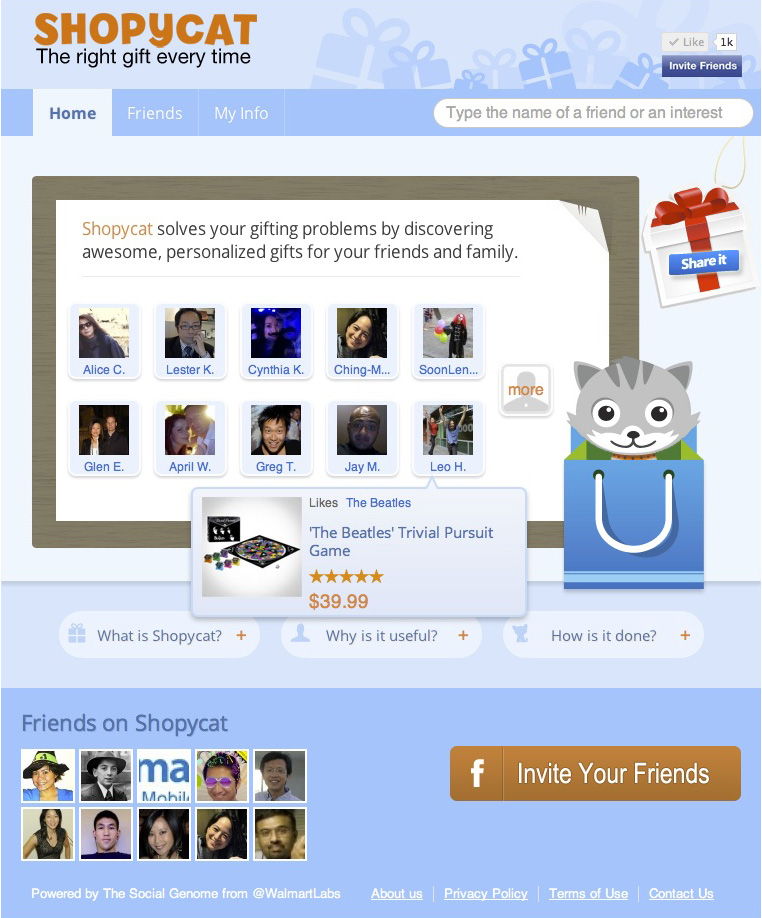 The system is smart enough to understand the sentiment behind a Facebook status update, too, not just the keywords involved. So, for example, if you posted “I hate Twilight!” as a Facebook status update, Shopycat won’t recommend that your friends buy you the “Breaking Dawn” Blu-Ray. It also knows what items are more “giftable” than others, using algorithms that examine a number of signals, including recency, uniqueness (e.g., a collector’s edition over a standard edition) and the aggregate buying behavior of shoppers on Walmart.com.

While the obvious goal is to encourage traffic and purchases via Walmart’s e-commerce website, the company has taken a unique approach by not making it a Walmart-only application. That is, if Walmart doesn’t have the perfect gift in stock, either online or at your local store, it will point you to another retailer who does. For starters, this includes a list of around 20 third parties, but the company plans to increase that number next year. This effort also includes gift cards for things like iTunes, Starbucks and Zynga.

These outside recommendations serve as a clever tactic to boost the viral nature of the Facebook app itself (i.e., it’s not Walmart only, so it’s actually kind of cool). But the design also helps Walmart take on its main online retailer: the virtually infinite online warehouse that is Amazon. Whether Walmart will then use these referrals (to which it receives no affiliate income, we’re told ), to later inform its own buying decisions has yet to be determined.

We do know that the company does plan on integrating Facebook Connect within its own e-commerce site at some point in the future, allowing users to authenticate with Facebook to see social recommendations from friends. This, of course, could serve the even more valuable purpose of associating a Facebook user’s online identity with their actual transaction data, but whether or not (or to what extent) this will occur is still unknown.

In the nearer future, the plan is to instead bring the Walmart.com online store to Facebook. The app currently shuffles users out of Facebook when it’s time to buy, but by mid-2012, Shopycat will function as an online store itself, allowing users to buy from Walmart without every having to leave Facebook.

Walmart isn’t the first to use Facebook’s social signals to make gift recommendations, of course. The homemade goods outlet Etsy launched its Gift Finder recently, also on top of Facebook data, and eBay’s latest acquisition, Hunch, which is known for building a “taste graph” of recommendations by asking questions, released its own Facebook app back in 2010. However, as the world’s largest brick-and-mortar retailer, Walmart’s foray into social commerce can’t be overlooked.

For what it’s worth, Amazon has had similar technology in place since July 2010, and had experimented with Facebook apps for social gifting as far back as 2008. But Amazon’s focus lately has been more on mobile, with a plethora apps and its Kindle devices, and less on developing its Facebook recommendation technology. Its Facebook-enabled recommendations, in fact, are still listed as being in “beta” on the Amazon homepage. And frankly, their accuracy hasn’t improved much since last year’s launch. In early tests, Walmart’s Shopycat app seemed at least on par with Amazon’s recommendations, which is to say, only fair. (Do not buy me Star Wars Jedi Bath Robes, for example.) But Shopycat doesn’t let you customize the recommendations beyond “unliking” a Facebook page to adjust the signals the app uses.

Even though technology like this has existed for years, it’s still the early days for social e-commerce. Many of the kinks and problems with leveraging Facebook for recommendations, gifting and otherwise, will be overcome in time. To give Shopycat a go for yourself, visit the Facebook app here. 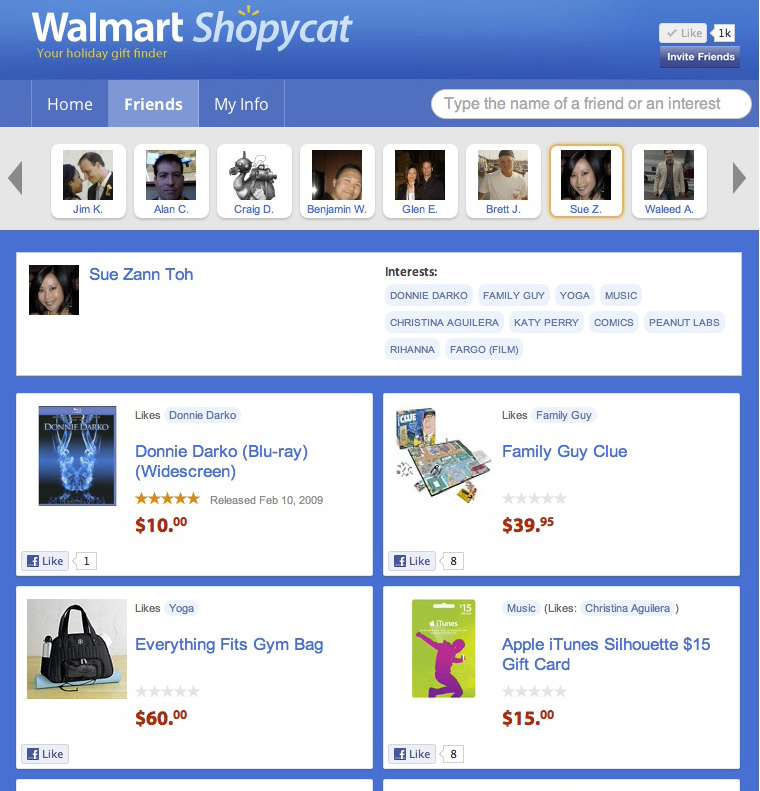