New Facebook game CastleVille is one of Zynga’s fastest-growing titles ever, as it announced a few days ago. That’s good news for the company, but maybe not good enough when you consider the trajectory of most of its other games on Facebook — and its plans for an initial public offering as soon as this coming week.

After launching in the middle of November, the medieval role-playing simulation title has grown to 6.9 million daily active users today, currently the third-highest out of any Zynga game on Facebook.

Overall, the developer has a total of 49.5 million daily actives on Facebook, according to Inside Network’s AppData application tracking service. It’s still by far the largest of any Facebook developer, but it has been falling from its peaks in previous months and years. Up until CastleVille launched, its games had been drifting down over the last 30 days from 48.2 million DAU.

And bigger picture, the company’s Facebook DAU had been 59 million in the second quarter, and had already fallen to 54 million in the third. In previous amendments to its filing, Zynga had said these changes were due “to a decline in players of our more mature games and a limited number of new game launches in the first nine months of 2011.” 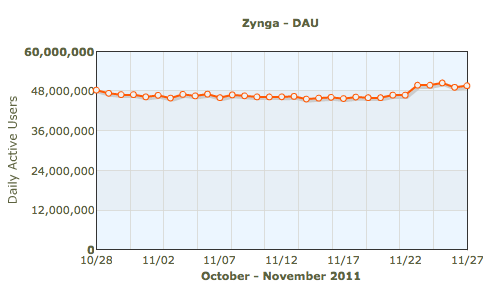 DAU is crucial because it indicates how addicted players are. This daily addiction is what leads some fraction of the players to buy virtual goods — the model that drives the social gaming business.

So, CastleVille has a lot of growing left to do if it’s going to bring back or replace all these former users. It’s certainly off to a good start. 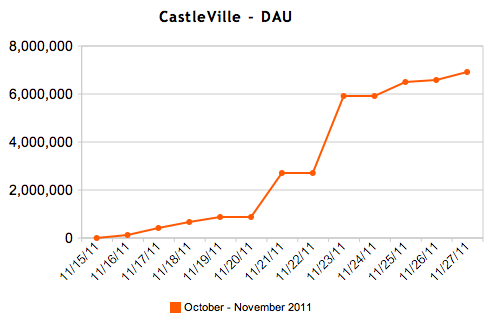 But by picking through the other 30-day AppData sets for Zynga’s other largest Facebook titles, you can see that most of its other games are declining. Zynga has had exceptional success at keeping its games popular with users over the months and years, but it is not immune from natural churn, nor from unsuccessful launches.

CityVille, its year-old city builder title and biggest game by DAU, has gone from 12.1 million to 10.8 million in the past four weeks. 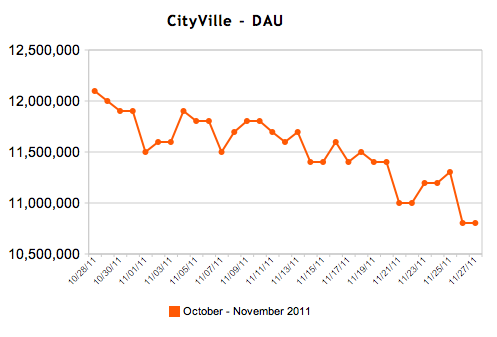 Its farming sim from 2009, FarmVille, is down by half a million, to 7 million today. 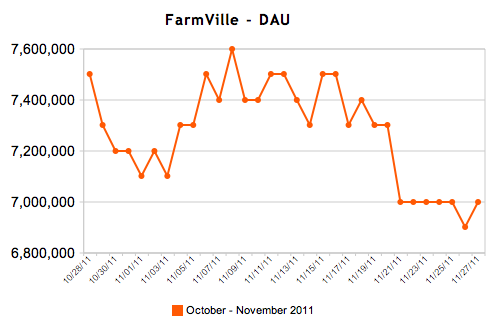 Texas Hold’Em, Zynga’s first hit (and an amazingly perennial one at that), has fallen below CastleVille, to 6.3 million DAU. 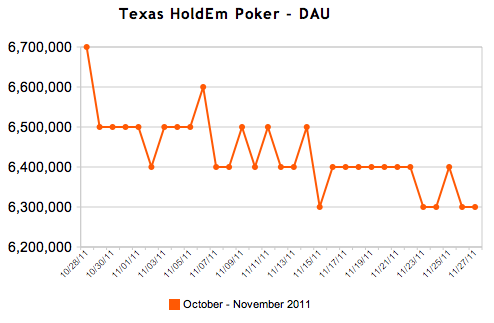 Empires & Allies, launched in June, has also fallen by half a million. 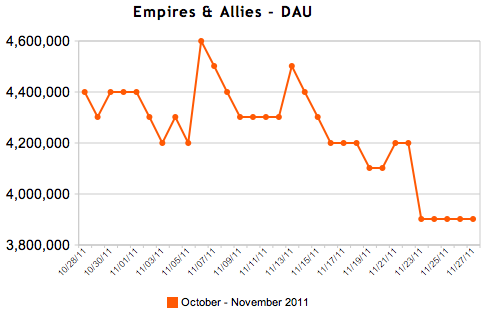 Other new titles are also not looking too healthy. Adventure World, which launched in September, is down by almost one million DAU. 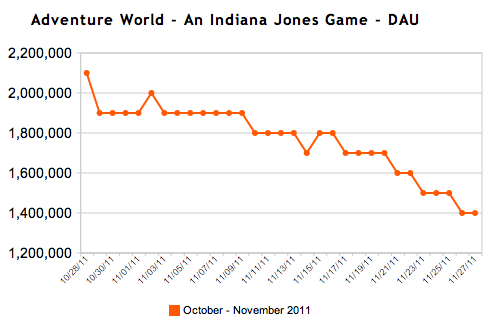 And Mafia Wars 2, the big new version of its long-standing RPG hit launched just last month, is now down by half. 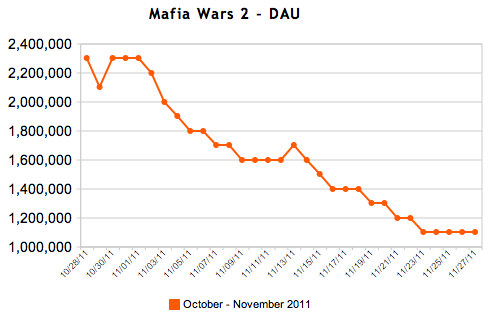 CastleVille isn’t Zynga’s only success story now. The developer has been making big gains on mobile in the past year, culminating with an increase of more than a million DAU in October for an average total of 11.1 million DAU across iOS, Android and mobile web apps, as Inside Mobile Apps spotted in the filings. That success has been led by Words With Friends, which has continued to grow this month. 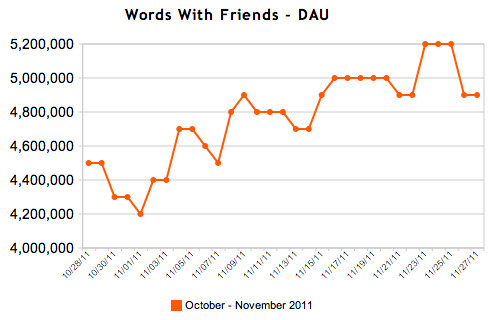 CastleVille appears to be getting at least some resources that had been supporting other recent launches. Zynga has traditionally grown traffic through clever combinations of tactics including many smaller iterations within games, large-scale advertising on Facebook, aggressive use of Facebook’s social channels, and launches of new games and expansions that it can direct players to when they get tired of older games.

Regarding Mafia Wars and Adventure World’s especially distinct falls, Zynga has cut off recent launches before — like for Poker Blitz, which you’ve probably never heard of.

There’s also a more specific issue that Zynga faces with cross-promotion, that has mattered more and more as its players — mostly people who don’t consider themselves “gamers” — get more sophisticated. As my former colleague AJ Glasser observes in a great analysis piece over on Inside Social Games, when people playing one game eventually get bored, they might not find a suitable replacement in Zynga’s stable.

But it also needs to show that it can keep gaining new users without losing too many old ones. CastleVille will need to show a strong growth streak over the next few months if it’s going to head into CityVille territory, and address its larger traffic concerns.