Most of the communications apps that have gotten big on smartphones have been built by well-established companies that have existing user bases they can promote to, with Facebook, Twitter and Skype being the top examples. The other successes have most often had venture money to help them cover advertising costs. 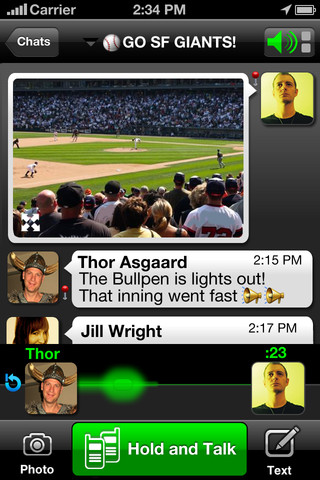 But a smaller startup has been climbing up the iTunes App Store and Android Market charges over the last few days. Called Voxer, it provides a walkie talkie push-to-talk voice service reminiscent of Nextel. Or, in modern parlance, it’s sort of like text messages but with voice instead of text. It’s basically a direct competitor to another startup, HeyTell, that we’ve covered, as well as TalkBox… and getting to be more of a competitor every day, judging by its recent trajectory.

The app has gone from #40 to #6 within the past week in the social networking category of the United States App Store, following its rise earlier this year in random other countries like Brazil and Saudi Arabia. It’s now a trend among many Twitter users, too. (Yeah, the social networking category isn’t especially big once you get past the leading web services, but this much growth for this type of app is unusual.)

To use Voxer, you simply download it from either store (iTunes here, Android here), create a new identity or log in with Facebook, sync it with your phone’s address book and/or Facebook, then start chatting with other individual friends, or groups that you join or create. The interface shows a text message style interface. You hold a talk button to record a quick message for the other party, although there’s also an option to listen live to an incoming message that a friend is recording. You can also send text messages within the flow of correspondence.

We talked to Voxer’s vice president of growth, Gustaf Alstromer, for more details. He’s a veteran mobile entrepreneur, from his days growing up in Sweden to his past startup Heysan to his current job. Distribution, as he explains with an acute understanding, has always been the biggest problem. “It’s a really good time now versus any other time in history” to be building a mobile app, he says, because “distribution has been solved by the App Store and Android Market, and now it’s about the tactics you use within that.” 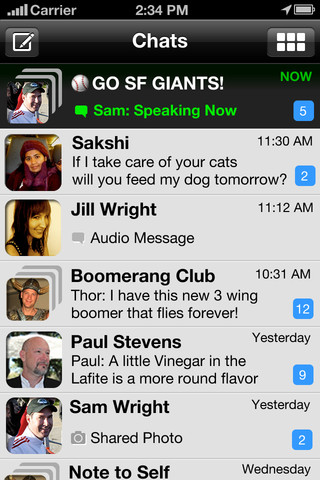 Alstromer says the city of Cleveland started getting big first in the US, which has been followed by growth in a number of other cities around the country. While it’s not entirely clear what set the app off, the company has a variety of best practices going for tracking clickthroughs, conversions, and overall usage, using third parties like Mixpanel as well as its in-house systems.

Services like this rely on network effects, and its launch on Android earlier this month could have played a big part — iPhone users are no longer stuck just using the app with other iPhone users. Alstromer says that its Android downloads have exploded (although he’s not providing any specific numbers), adding that total usage on Android could pass iPhone within the next few months. The phonebooks are far more essential than Facebook overall, although the latter is crucial for some demographics.

The company also has an unusual backstory. It’s founded by veteran entrepreneur Tom Katis, a decorated soldier who previously cofounded a major security contractor, Triple Canopy (here’s a good New York Times profile on the company from 2005). The idea for Voxer originated during an ambush in Afghanistan, he tells me, when he was trying to coordinate reinforcements and the medical team in the middle of a firefight — he needed a way to talk to everyone all at once, and the government-issue walkie talkies weren’t doing the trick. I’ll have more on his story later.