We have an Apple iPad 2 to give away today. Do you want it? Would you say you’re a big Jimi Hendrix fan? Then you’re in luck. Not only are we giving away an iPad 2, but we are giving one away that has a pretty awesome Jimi Hendrix app already installed on it.

Sony Music, The Hendrix Estate and Universal Mind have joined forces to create this super immersive experience — an amazing discovery tool that doesn’t just stream music, but unveils Jimi’s life story complete with interactive audio, video, pics, landmarks and more that you can curate yourself.

If you’re a Hendrix fan, it’s pretty cool to say the least. If you want a shot at winning this brand new iPad 2 with the new Jimi Hendrix Experience app, just follow the steps below.

2) Then do one of the following:

Please only tweet the message once or you will be disqualified. We will choose at random and contact the winner this Sunday. Anyone in the world is eligible.

Here’s a little video on Jimi Hendrix: The Complete Experience 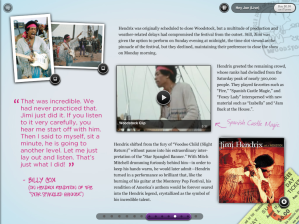 Update: This giveaway is now over. We will update this post once we have our winner.