How many times have you checked in to Foursquare via the web? If you’re like me and I’m willing to bet most people, the answer to that question is “None.” Foursquare, who is likely well aware of this, has just pushed the latest in the series of #New4sq updates, in an effort to improve (and not solely to garner data from) the lives of its web users. One million daily unique visitors is a terrible thing to waste.

The Foursquare.com site redesign is the third major product development that aspires to move Foursquare beyond the check in; The company recently launched Explore to derive value from all the checkin data it has accumulated over the past three years, then Radar which allowed users to take advantage of that data with minimum effort.

Users visiting Foursquare.com  from a computer or a tablet (through the magic of HTML5) will now see a Google map of emblazoned with Icons for all the places of note around them, populated by explore data. Hover over the icons and you get even more data. On your right you can view ever-changing list of Suggested places, which is contingent on time of day. 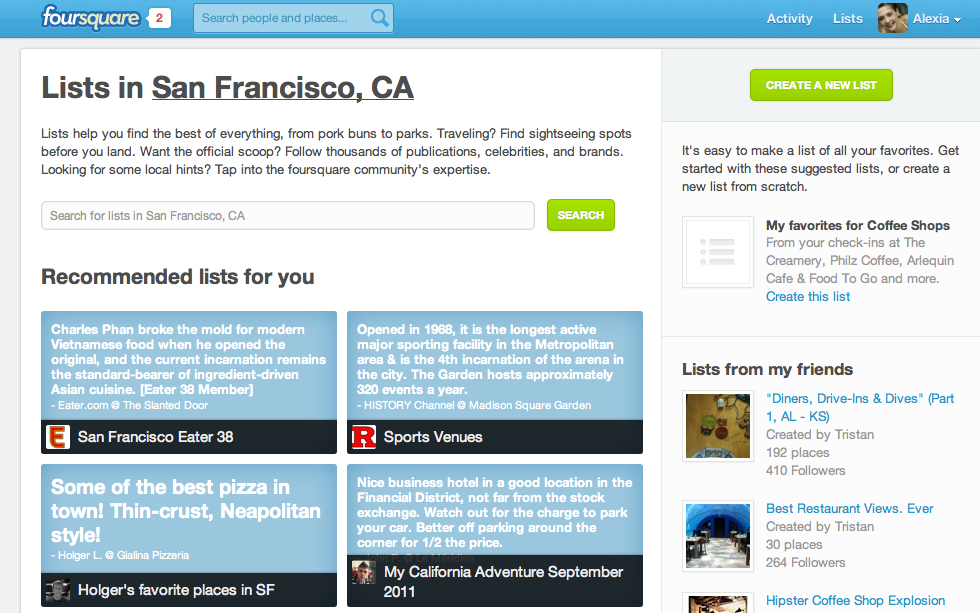 Foursquare is also taking its newly launched Lists feature one step further, allowing you to search, view and follow recommended Lists via web, which will in turn buzz on Radar when you turn it on on your phone. Other changes include the fact that you can now can now comment and view comments directly from the web interface, view photos in a larger, more crisp format, see other people’s Foursquare points on their profiles. There’s also a “Brands on Foursquare” section in the bottom right, just because.

Foursquare is making a concerted effort be more than just an app for checkins, as we and every other person who covers this stuff has noted before. The difference here is the mobile-first startup is expanding its horizons way beyond its iOS roots in order to become a location-based city guide and recommendation service, sort of moving towards Yelp while Yelp ironically moves towards Foursquare.

And it just might succeed too, with the wealth of more than a billion checkins from which to draw conclusions about the destination predilections of its ten million users, “[We want to do whatever] we can do with this data to make people more aware of the world around them in real-time and geographically relevant way,” Foursquare Head of Product Alex Rainert said as he gave me a tour of the site earlier.

Already I’ve learned about two different places in my neighborhood that I never even knew existed.