KinderTown is a newly launched app store for parents which offers a curated collection of kid-friendly applications. What makes the store unique is that it only includes apps which have been deemed to have “substantial educational value” for kids three to six years old. In order to evaluate the apps’ quality, each app is first reviewed by early childhood educators, then tested by parents and kids before admission.

At launch, KinderTown’s app store is available as a universal app that works on the iPhone, iPad and iPod Touch. When you launch KinderTown, you can filter the app selections by platform (iPhone, iPad or Universal), recommended ages, subject matter (e.g., math, language, art, science, etc.) and price (free or paid). 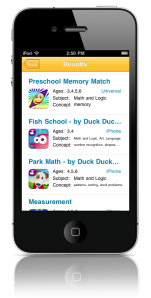 Apps that match your search filters appear on screen, and you can tap on them to see descriptions, screenshots and pricing information. A tap on the “get the app” button will then pop you over to the iTunes App Store to start the download.

The KinderTown staff includes two former teachers responsible for the app reviews. Kay Welch specializes in early childhood education and has more than 20 years of experience teaching and writing curriculums for school districts. Carolina Nugent spent five years as a kindergarten teacher and received recognition for her integration of technology and apps in the classroom.

The concept for the KinderTown itself comes from serial entrepreneur and DreamIt Ventures co-founder Steve Welch. Steve previously founded Mitos, a global company in the biotech-manufacturing field, which was later sold to a Fortune 500 company. He says that the idea for KinderTown emerged from his own frustration in finding good educational apps for his own 4-year old daughter.

As a geek parent myself, I know that feeling. Although my child is only now pushing two, she’s already madly addicted to the iPhone and iPad, shouting “monkey!” (thank you, Monkey Preschool Lunchbox) every time she sees either device. In a home filled with many beloved gadgets, it’s only a matter of time before she’s completely sucked into the iOS gaming world.

But with an App Store that now boasts over half a million applications, it’s beyond challenging to find appropriate, functional, and hopefully not entirely brain-rotting apps these days.

Although Apple could one day upgrade its own “Genius” offering to allow for more granular filtering and searching, that day hasn’t yet arrived, allowing KinderTown to step in and serve this need. For now, the app will support itself through the App Store affiliate program, but it may offer premium subscriptions for additional learning products in the future.

Self-funded KinderTown is now available as a free download here on iTunes.