Asana, the web-based productivity service that counts Facebook cofounder Dustin Moskovitz as one of its founders, is launching to the public today. No, it isn’t anything like Facebook, but if you’re looking for a productivity solution with a new twist, it may be exactly what you’re hoping for.

You’d be forgiven for thinking Asana had already launched, since you’ve been hearing about it for a long time — because it was founded by Moskovitz and early Facebook employee Justin Rosenstein, the company has been closely tracked by tech pundits since its earliest days.

In November 2009 the company announced that it’d raised $9 million from Benchmark Capital and Andreessen-Horowitz, following a $1.2 million angel round the previous spring. From there, the service entered a lengthy private beta. They gave a peek behind the curtains in February of this year — two years after they first got started — and have continued to iterate on the product since then. Just weeks ago the site saw another major UI refresh, and today, they’re finally ready to let the masses in.

I’m going to include a few high-level details on how the product works, but the reality is this: you really need to try it out for yourself to see if it’s your cup of tea, as much of Asana’s potential stems from the fact that you can mold it to suit your needs. You’ll also want to check out the video below, which does a good job showing off some of the basics. With that said…

The first time you log in, there isn’t going to be a new feature that immediately jumps out and dazzles you. Let’s be very clear: this is enterprise productivity, and it is not particularly sexy. But it’s powerful all the same. At the bottom of the screen you’ll notice several videos that explain how to use Asana in various ways — and the use cases are diverse. In a call to discuss the news, the founders, along with employee Kenny Van Zant, explained to me how it’s been successfully used to manage everything from inbound employee applications to agile software development.

Asana doesn’t have any chat or status update features, and you won’t find your coworker’s employment history on it, either. It is not a social network. Instead, rather than building a network that revolves around people, Asana’s founders say that they set out to build a network that puts your work items at the center.

On the left side of the screen you’ll find the main nav bar, which includes a listing of company projects, tags, and people in your company. At the top you’ll find an item with your tasks, which is what you’ll be using to plan out (and tell everyone else) what you’re working on.

In the main, right panel, you’ll be able to browse through the tasks. Projects can include a hierarchy of tasks, each of which can be delegated to coworkers and teams. Clicking on a task will bring up a new pane at the right side of the screen with additional information: who’s involved, any relevant file attachments and emails, and so on.

One thing you’ll notice throughout the experience: Asana is fast. The founders say they’ve obsessed over making Asana’s HTML5-based app feel native, and it shows. Integrated keyboard shortcuts are (mostly) intuitive, and there’s little-to-no lag as you navigate around. There’s also some other nice features including deep email integration — you can forward messages from your inbox to a special email address to assign it to a certain project, or even a certain person. This also helps in companies where only a fraction of employees have signed up for Asana proper, as the employees who haven’t signed up with be able to participate through email.

The service is free for groups of up to 30 people — beyond that the company will eventually start charging. Down the road they may also offer additional features for a premium.

I’ve been tinkering with Asana for the last couple of days, and I’ve liked what I’ve seen so far, to the point that I’m eager to see if we can work it into TechCrunch’s internal workflow (we rely almost exclusively on Yammer, which isn’t so great for collaborating around individual tasks). With that said, there’s definitely a learning curve, though the service is doing everything it can to make sure the experience doesn’t require a day-long training session before new users can figure out how it works. 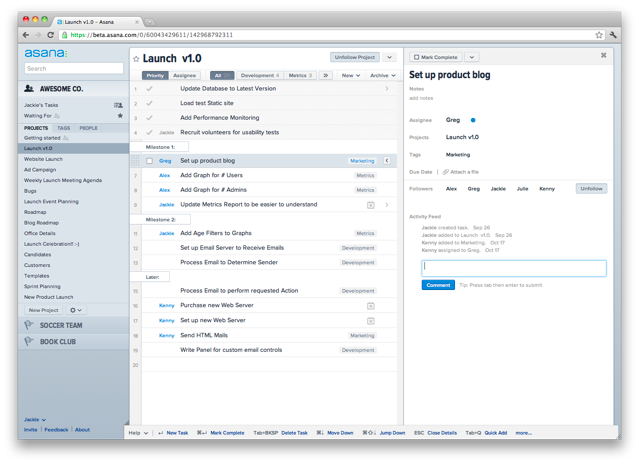