Founded by husband and wife team Jonathan and Danielle Jenkins, OrderWithMe is a group buying site specifically designed for the small Western businesses who are having trouble navigating the somewhat unintelligible world of Chinese manufacturers.

By allowing companies to buy in bulk, OrderWithMe can offer the same deals that larger retailers get, which means up to 70% discounts on fashion and furniture items.

Co-founder Jenkins came up with the idea for OrderWithMe when — as a merchant himself — he realized that bulk, factory-level information from sites like Alibaba was of little help to an American small business. Instead of a choice of 35K handbags, Jenkins needed something that would narrow down inventory selection to only the hundred most popular.

OrderWithMe differentiates itself from Alibaba by offering a skill that is increasingly more valuable, a crash course in “how to handle China” for Americans; “We understand the value of providing customer service when ordering inventory from Chinese factories,” Jenkins says. “The market for wholesale is so fragmented in America. It’s so difficult to know where to get it and who to trust. And [with OrderWithMe] you can talk to an American customer sales rep who knows exactly what you need. ”

Jenkins holds that what sets OrderWithMe apart from other SMB  deals services like Busy Deals is that no one site doing physical inventory and merchandise. The company monetizes by taking a cut of a markup on the product after it leaves the factory and because OrderWithMe holds no inventory, there is no inventory risk if sale doesn’t tip it doesn’t tip. “We don’t have the risk of not being able to sell,” Jenkins said.

After their launch at Disrupt, OrderWithMe plans on offering a few small businesses a free OrderWithMe  starter package of $50K worth of retail inventory to help businesses struggling in a rough economy, “We’re wanting to help other people who are having a hard time and make things a little bit easier.”

OrderWithMe presently has $250K of angel funding and the nine person team (with six Americans and two Chinese employees) is run out of Hangzhou, China. 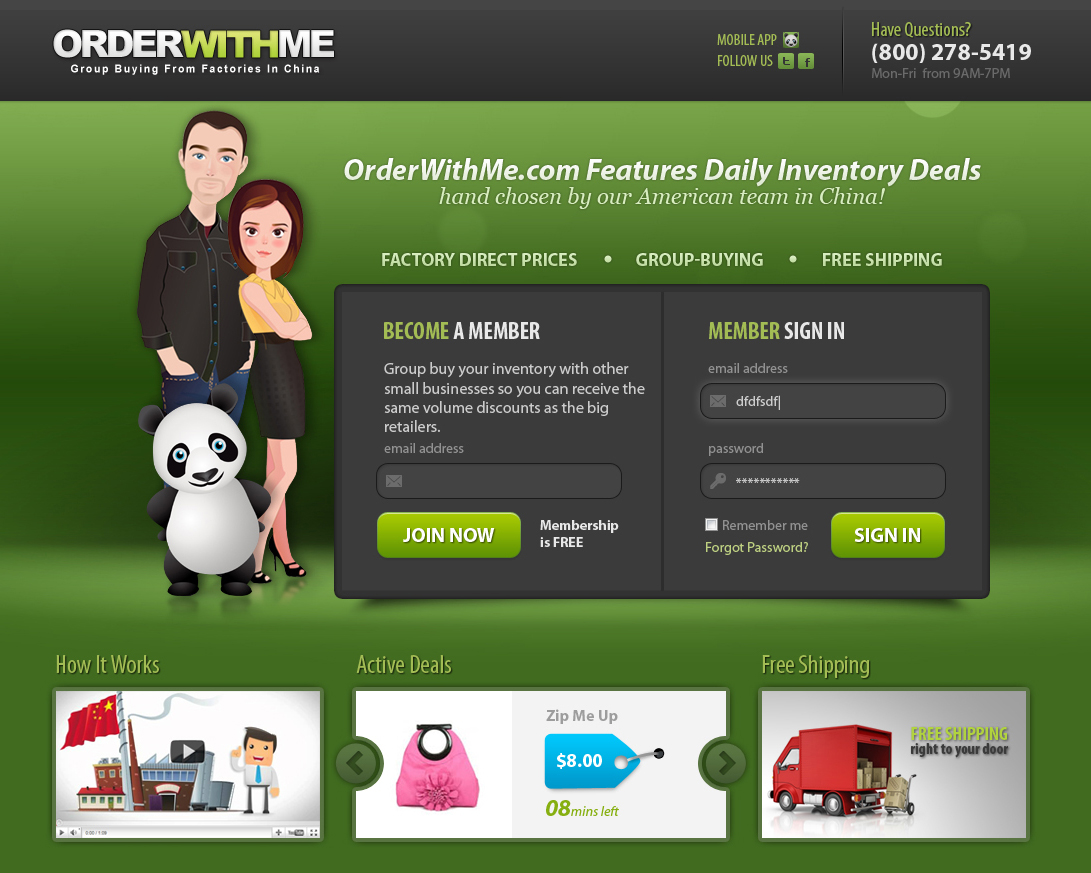 Q: Sounds like you’re trying to bridge two worlds? How do scale this?

A: We’re not looking to add 1000s of categories and 1000s of products we’re starting at what we know.

Q: How do you keep SMB happy when orders aren’t being met.

A: We’re starting niche, fashion and home décor, so it’s not thousands of choices.

Q: Look at the Japanese trade store, Rein Queen Rein King, which only sells best selling items from department stores.
A: That’s perfect. This is a worldwide product for small businesses.

Q: This is great, now small businesses can compete with Wallmart on pricing.

A: We wanted to level the playing field.